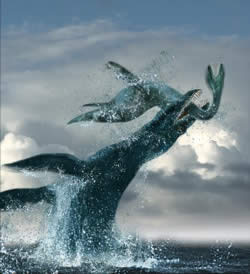 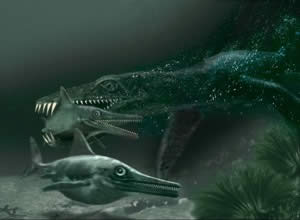 OSLO, Norway -- Researchers on Thursday announced the discovery of the remains of a short-necked plesiosaur, a prehistoric marine reptile the size of a bus, that they believe is the first complete skeleton ever found.

The 150 million year old remains of the 33-foot ocean going predator were found in August on the remote Svalbard Islands of the Arctic, the University of Oslo announced.

Fragments of plesiosaur have been found elsewhere, including in England, Russia, and Argentina, but researcher Joern Harald Hurum said the partially fossilized Svalbard find appeared to be the first whole example.

"We are quite sure it is complete," he said by telephone about the partially buried fossils. "We have the head, and can see about six meters (20 feet) of vertebrae before it disappears into the ground."

Hurum said the voracious plesiosaurs were like the Tyrannosaurus Rex of the oceans, "expect its head is much bigger. About 2 meters (6.5 feet) long, compared to about 1.6 meters (5.25 feet) for Tyrannosaurus Rex."

The University's Natural History Museum said the reptile was "as long as a bus, with teeth larger than cucumbers ... in a head that could swallow an adult human whole."

Twenty-seven other marine reptiles were also found during a two-week expedition: 21 long-necked plesiosaurs, sea reptiles similar to drawings of the Loch Ness monster, and six ichthyosaurs, reptiles that looked and had fins like fish.