Is This The Perfect Prawn? 'Beautifully Textured Meat, Rich Color, Robust Size And A Great Taste' 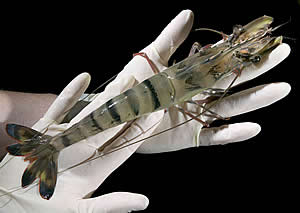 The new breed is providing a real boost for the prawn farming industry in Australia.

SOUTH VICTORIA, Australia -- After 10 years of careful breeding and research, scientists have developed what could be the world's most perfect prawn.

CSIRO scientists and the prawn industry have bred an improved Black Tiger prawn which is producing record yields in aquaculture farms and winning awards.

So good are these prawns that they have won five gold medals at the Sydney Royal Easter Show in the past two years, including 'Champion of Show', the highest award possible.

The scientists from CSIRO's Food Futures Flagship have used DNA technology to ensure the breeding program captures the very best Black Tiger prawn stocks that nature can provide and boost the performance of stocks each breeding season.

With about 50 per cent of all prawns sold in Australia currently imported from countries such as China and Vietnam, developing an Australian prawn that breeds in captivity and is completely sustainable is a major gain for both the local prawn industry and consumers wanting to buy Australian seafood.

"The new prawn's yield has exceeded all our expectations. The average industry productivity for farmed prawns is only five tonnes per hectare, so this year's average yield of 17.5 tonnes per hectare is a major leap forward," Dr Preston said. "These huge yields can be replicated year after year which means consistent supply of a reliable and high quality product - all vital factors for the long-term growth and prosperity of the Australian prawn farming industry."

If the rest of the Australian Black Tiger prawn industry adopted the new breeding technology Australia's production could increase from 5,000 tonnes to 12,500 tonnes, adding $120 million annually to the value of the industry by 2020.

The general manager of Gold Coast Marine Aquaculture (GCMA), Mr Nick Moore, said the partnership with CSIRO had assisted GCMA to breed successive generations of prawns in captivity, transforming their business from one plagued with seasonal fluctuations into a reliable primary producer with consistent and predictable output.

"Thanks to outstanding work by the staff here, aided by close collaboration with our partners at CSIRO, we have just finished a prawn breeding season that can only be described as staggering," Mr Moore said.

"Not only have we achieved national and international yield records with no reduction in quality or taste, these prawns are grown in a specially designed, environmentally sustainable production system. This production system and the new breeds have produced a perfect prawn with beautifully textured meat, rich color, robust size and a great taste.

"The awards (Sydney Royal Easter Show) are professionally judged on many criteria including size, color, taste and texture, so the results speak for themselves."

Director of CSIRO's Food Futures Flagship, Dr Bruce Lee, said the results were a phenomenal achievement for the industry and for CSIRO.

"Our main goal is to add real value to the profitability of the Australian agrifood industry," Dr Lee said. "With Australia's population predicted to reach 35 million by 2050, the challenge is to help Australia secure its own food supply, contribute to the food supply of the region and be competitive in global food markets. This result is just the tip of the iceberg for us and represents a major opportunity for the growth of sustainable marine aquaculture in Australia and with global partners.

"Of particular significance to Australia is that marine aquaculture is a drought-proof industry and there's huge potential for the environmentally and economically sustainable expansion of pond-based aquaculture farms right around the Australian coastline."

Until recently, Black Tiger prawns found in oceans and estuaries could not be bred in captivity, so prawn farmers had to rely entirely on trawlers to catch wild prawn parents to stock farm ponds with their progeny each season.

The project received critical funding in 2008 when the Queensland Government provided the CSIRO with a $500,000 Smart State Innovation Projects Fund grant to advance their research. This grant enabled CSIRO to expand its work with Gold Coast Marine Aquaculture to Australian Prawn Farms (near Sarina) and Pacific Reef Fisheries (near Ayr).

"Queensland's prawn farmers produce an average of 3,200 tonnes of farmed prawns a year, worth about $50 million to the State's economy. With increasing demand for produce, especially from South-East Asia, our capacity to meet that demand has, until now, been limited," he said.

"Improving the quality of produce and increasing farm yields will give Australian prawn farmers a real market advantage. It will certainly boost Queensland's aquaculture industry and pay major economic dividends to the State."