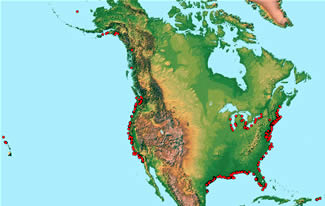 WASHINGTON, D.C. -- In a new report, the NOAA National Centers for Coastal Ocean Science research has found a continuing decrease in toxic organic chemicals in mollusks, specifically mussels and oysters, collected at more than 250 sites nationwide. The findings, linked to bans and restrictions on the use of polychlorinated biphenyl (PCB), chlorinated hydrocarbons, tributyltin and cadmium, was announced in Vol. 62, no. 4 of Marine Environmental Research, a scientific journal.

Produced by the National Status & Trends Program's Mussel Watch Project, which began in 1986, the report updates findings last published in 1996. The results, based on data through 2003, show continued decreases in national median concentrations of the chemicals and no increases nationally. The Mussel Watch Project is the longest continuous contaminant monitoring program of U.S. coastal waters. It analyzes chemical and biological contaminant trends in sediment and the tissues of bivalves such as mollusks.

"The overall tendency for chemical contamination to be decreasing is good news for the United States," said John H. Dunnigan, assistant administrator of the NOAA Ocean Service. "These results exemplify the benefits of incorporating long-term chemical monitoring into the Integrated Ocean Observing System."

Each of the chlorinated hydrocarbons studied as part of the biennial update is banned or heavily restricted for use in the United States. Researchers noted it was not unexpected that concentrations of these chemicals have declined since the 1996 report. Researchers also stated the only unanticipated result after 10 additional years was that all decreasing trends remained statistically significant.

The NOAA National Centers for Coastal Ocean Science conducts research ranging from the study of biomolecular changes due to coral bleaching, to the causes of shellfish disease, to modeling the effects of climate change on fisheries stock assessment. The research is broad, multi-disciplinary, geographically diverse and involves many partners. The goal of the centers is to improve the science upon which coastal managers make decisions.

The Integrated Ocean Observing System, or IOOS, is a network of systems that routinely and continuously provide quality controlled data and information on the current and future status of the oceans and Great Lakes from the global scale.