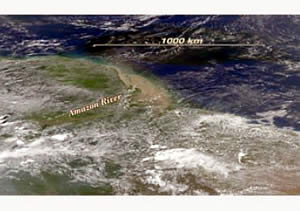 True-color image of the Amazon outflow, which nourishes plant life thousand of kilometers into the Atlantic Ocean. Credit: Norman Kuring/NASA 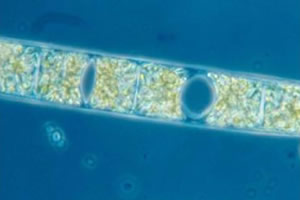 Until now, the areas around the Amazon and other great rivers had been thought to be emitting CO2, so the study may affect climate scientists' calculations of how the greenhouse gas acts. The study appears in this week's Proceedings of the National Academy of Sciences.

"This new understanding allows us to better think about how carbon dioxide is cycled between the atmosphere and the oceans, and how this might change in the future," said lead author Ajit Subramaniam, a biological oceanographer at Columbia University's Lamont-Doherty Earth Observatory. Lamont is part of The Earth Institute.

The Amazon River is the world's largest, accounting for nearly a fifth of earth's river input to the oceans. Using satellite imagery and samples taken at sea over three years, Subramaniam and colleagues outlined a rich plume of microscopic phytoplankton nourished by its outflow, covering 1.3 million square kilometers (500,000 square miles), an area about twice the size of Texas. Tropical waters are generally considered poor because they lack nitrogen, a nutrient essential for plants, so the scientists were surprised to find so much life. The secret: a predominance of diazotrophs, photosynthetic microorganisms that fix nitrogen directly from the air. They were able to bloom far from shore because the Amazon also washes other needed nutrients eroded from land: phosphorus, iron and silicon. Plants use large amounts of carbon dioxide for photosynthesis, so the region, previously estimated to emit a yearly 30 million tons of CO2, is probably soaking that amount back up, said Subramaniam. Furthermore, once the diazotrophs bloom, they tend to sink quickly to the bottom, more or less permanently removing the CO2 from the air. Because excess human-generated CO2 is warming the atmosphere, artificial trapping of CO2, or "sequestration," has become a subject of rising interest. Here, the scientists showed, it is happening naturally on an unexpected scale.

Each year the world's oceans are thought to absorb about 2 billion tons of CO2 from the atmosphere, but the amount permanently sequestered by sinkage is unclear. The new discovery may tilt the estimated balance between air and oceans by only about 2%, said Subramaniam. However, he said, "it alters our view about the processes that we think are going on. There may be other surprises out there." Studies of other large rivers including the Congo, Orinoco and Mekong suggest that similar processes may be taking place there.

Subramaniam said that climate change, booming human populations and intensified land uses could alter the workings of the great river basins. For instance, ongoing conversion of Amazonian rainforest into farmland may increase outwash of nutrients; in some regions, future warming could greatly increase rainfall, and thus river flows. On the other hand, proposed large dam projects on rivers like the Orinoco could cut flow by as much as half. "The whole process could change," said Subramaniam. "But we can't predict how it will change, or what the outcome will be."