Fate of New England Monster Shark Tournament Uncertain; 'I am ashamed of it' 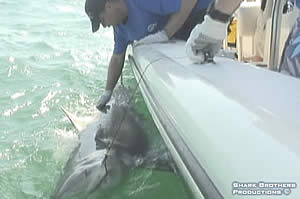 John Tyminski, Mote Adjunct Scientist, verifies solid placement of the conventional tag after the female bull shark is secured to the research vessel.

SARASOTA, Florida -- Five teams won the right this weekend to compete in the final round of the Guy Harvey Ultimate Shark Challenge - an innovative shark tournament uniting sport fishing, science, business and humane interests as never before.

The Challenge is a catch-and-release only competition off the Southwest Florida coast in which fishermen compete by catching sharks and scientists tag the sharks for conservation research purposes to learn more about the animals' travels in the wild. The Challenge is designed to be a "next generation" model for shark fishing competitions, supporting shark protection while providing the excitement that spectators and anglers have come to expect.

A select group of nine teams was chosen to fish in the qualifying round on May 1 and 2 out of Burnt Store Marina in Punta Gorda. The five high-scoring teams will fish the Grand Championship Finale on May 21-23 at Mote Marine Laboratory and Aquarium in Sarasota.

Below is a table showing the winners, their scores and catches. Learn about how points are awarded at: http://ultimatesharkchallenge.squarespace.com/rules-event-overview/

"I honestly feel we're making history here," said Sean Paxton. He and his brother, Brooks, known as the Shark Brothers, are creators and directors of the event along with co-Director and Associate Producer Capt. Robert Moore. The directors said: "Our vision was to combine the goals of sport, science and conservation collaboratively and effectively. We've already achieved that in the qualifying round, and this is only the beginning."

The 8-foot, 2-inch female bull shark was fitted with a satellite-linked tracking tag by scientists from Mote's Center for Shark Research on the morning of Saturday, May 1. By the following Tuesday, May 4, the tag had sent a number of transmissions showing that the shark was about three to four miles offshore of where it was caught, tagged and released. Mote scientists will continue to track the shark's movements and a website displaying the tracks will be available for the public very soon.

"It's especially important that we satellite-tagged a mature female, because she may lead us to where she's mating or giving birth to pups," said Dr. Robert Hueter, Director of Mote's Center for Shark Research, who oversaw all scientific aspects of the tournament. "When it comes to mating grounds for bull sharks, we know zero."

Finding and protecting these mating grounds and "nurseries" where shark pups shelter and grow is important for conservation and management of shark populations. The tournament's scientific goals include satellite tagging a mature female great hammerhead shark - considered "endangered" by the World Conservation Union (IUCN).

High winds and choppy seas may have lessened the chance for catching great hammerheads and other target species during the qualifying round. Also, unusually cold weather this year may have delayed movement of the sharks' prey fish into the area. Tournament organizers are optimistic that more chances for satellite tagging will arise during the Grand Championship.

Tough fishing conditions didn't dampen the anglers' spirits. "You guys really shined," said Co-director Moore during the awards reception Sunday evening. "We've got some real professionals here. I want to thank and acknowledge all the teams and observers. These guys are the stars of the show." The public can watch the five remaining teams compete in the Grand Championship on May 21-23 at Mote Marine Laboratory and Aquarium. Spectators onshore can enjoy an exciting and educational multimedia experience, including video feeds from the heart of the action. Learn more at the tournament website: http://ultimatesharkchallenge.squarespace.com/