Researchers trawl the origins of sea fishing in Northern Europe 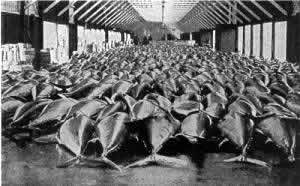 COPENHAGEN, Denmark -- Ocean historians affiliated with the Census of Marine Life have painted the first detailed portrait of a burst of fishing from 1900 to 1950 that preceded the collapse of once abundant bluefin tuna populations off the coast of northern Europe.

The chronicle of decimation of the bluefin tuna population in the North Atlantic is being published as other affiliated researchers release the latest results of modern electronic fish tagging efforts off Ireland and in the Gulf of Mexico, revealing remarkable migrations and life-cycle secrets of the declining species.

Dusting off sales records, fishery yearbooks and other sources, researchers Brian R. MacKenzie of the Technical University of Denmark and the late Ransom Myers of Canada's Dalhousie University show majestic bluefins teemed in northern European waters (North Sea, Norwegian Sea, Skaggerak, Kattegat, and Oresund ) for a few months each summer until an industrialized fishery geared up in the 1920s and literally filled the floors of European market halls with them.

The research, to appear in a special edition of the peer-reviewed journal Fisheries Research, shows that generations ago Atlantic bluefins typically arrived in the northern waters by the thousands in late June and departed by October at the latest, their foraging travels likely related to seasonal warming.

Danish fishers from the mid-1800s welcomed the bluefin tuna as a partner in the catch of the garfish species. The bluefins pursued garfish into nets that fishers set close to shore.

Before World War I, the bluefins were rarely captured and even coastal sightings were exciting events. One measuring 2.7 meters (almost 9 feet) washed up on a German shore in 1903. Those captured in the 1920s ranged from 40 kilograms to giants of 700 kilograms, with an average weight of 50 to 100 kilograms.

Major tuna fishing countries at the time such as Norway, Denmark, Sweden and Germany, recorded virtually no bluefin landings in 1910 and almost 5,500 tonnes by 1949. In 1915 nearly 8,000 bluefin (690 tons) were landed in Gothenburg, Sweden alone.

In 1929, Denmark built its first tuna cannery -- a milestone in the new industrial approach echoing elsewhere in Europe. In the 1920s, the catch peaked at Boulogne, France, homeport for the French bluefin fishers in the North Sea.

Landings of bluefin tuna by northern European boats in record numbers soared through the 1940s and by decade's end approached the catch levels of traditional Mediterranean fisheries. In 1949, Norway had 43 boats in pursuit of the bluefin; the next year it had 200. Norwegian catches briefly exceeded 10,000 tons per year in the early 1950s.

Better means of catching the tuna early in the 20th Century also attracted sport fishing pursuits and businesses, beginning in the 1920s. One sport fisher caught 62 bluefins near the Danish island of Anholt in 1928 as enthusiasm spread quickly through the U.K., Norway and elsewhere.

Abundant fish allowed recreational fishermen to establish the Scandinavian Tuna Club, which arranged bluefin tournaments in the straits between Denmark and Sweden until the early 1960s.

The authors say the fish was a top predator in the North Atlantic ecosystem, feeding largely on herring and mackerel, squid and other species. By one estimate from the 1950s, some 30% of all herring consumed by its predators in the area was ingested by bluefin tuna.

The booming catches helped strip the Atlantic bluefin population in a relative blink of time -- 1910 to 1950. The species virtually disappeared from the region in the early 1960s and is still rare today.

Financed by the CONWOY project of Denmark's National Science Foundation and the European Union's MARBEF Network of Excellence, the work is part of the History of Marine Animal Populations, one of 17 projects that comprise the global Census of Marine Life.

Says Dr. MacKenzie: "We can't say with certainty that over-exploitation is the smoking gun in the bluefin tuna's disappearance -- but clearly there's been a murder.

"We've shown bluefin tuna were here for a long time in high numbers. High fishing pressure preceded the species' virtual disappearance from the area and apparently played a key role but other factors under study might have compounded the fishery's demise --the catch of juvenile tuna in subsequent years, for example.

"As well, it's important to note that fishers from many other countries in Europe as well as Japan, the U.S. and Canada, contributed to the soaring increase in North Atlantic bluefin tuna fishing throughout the last century. We hope our work will inspire a more precautionary approach to the management of bluefin tuna in the Atlantic, with more concern about re-establishing and maintaining the historical range of the species."

Another new study suggests that the bluefin tuna that historically foraged in the Norwegian and North Seas in summer likely commuted to and from the area via waters off the northwest coast of Ireland.

In a paper for the journal Hydrobiologia, CoML and marine scientists from Canada, Ireland and the U.S. (Michael Stokesbury, Ronan Cosgrove, Andre Boustany, Daragh Browne, Steven L. H. Teo, Ron O'Dor and Barbara A. Block) report on the remarkable migrations of Atlantic bluefin tuna tagged off western Ireland in 2003 and 2004.

Two fish tagged within minutes of each other wound up more than 5,000 km apart eight months later. One traveled 6,000 km southwest in 177 days past Bermuda to waters about 300 kilometres northeast of Cuba; the other remained in the eastern Atlantic and moved off the coasts of Portugal. A third tagged bluefin swam into the Mediterranean Sea and was caught by fishers southeast of Malta in 2005.

Experts believe there are two stocks of Atlantic bluefin tuna, one that spawns in the Mediterranean Sea, the other in the Gulf of Mexico and the Florida Straits. It's theorized that the two stocks forage together in the North Atlantic and travel to opposite sides of the ocean to reproduce.

"These tagging data potentially provides new evidence that mixing is occurring in the northern waters of the eastern Atlantic and complement prior data showing that the western and eastern stocks of north Atlantic bluefin mingle in rich foraging grounds of the central Atlantic," says Barbara Block, chief scientist of the CoML Tagging of Pacific Predators program and TAG.

"It's possible all three fish were spawned in the Mediterranean," she emphasized. "We're conducting genetic tests on fin clips taken while tagging to help confirm the origins of the specific bluefin tuna that we followed electronically."

The research is funded by Ireland's Bord Iascaigh Mhara, the Packard Foundation and the Monterey Bay Aquarium Foundation.

Yet another modern tagging experiment has yielded important new insights into the vital bluefin breeding area in the Gulf of Mexico and the oceanographic conditions in which the adult tuna court and spawn.

The work by U.S. researchers Steven L. H. Teo, Andre M. Boustany and Barbara Block, for publication in the journal Marine Biology, sheds light on habitat used by spawning bluefin tuna and may one day lead to better protection in U.S. waters. The spawning stock has dropped 90% in the past 30 years.

Using data from 28 tagged Atlantic bluefins (recording location, depth, water temperature, light level and the tuna's abdominal temperature), the researchers correlated the breeding behaviours revealed by the tags with a suite of variables at those locations, including sea surface temperature, current and wind speed, topography of the ocean floor, eddies, and surface chlorophyll concentrations.

They found a majority of bluefin (some weighing up to 300 kilograms) gravitated to areas near the Florida straits and the western part of the Gulf of Mexico to reproduce and that the favourite places tend to be where sea surface temperatures are 24 to 27 degrees Celsius and where the slope of the shelf is steep. Even a relatively small change in the distribution of sea surface temperatures in the Gulf of Mexico will likely cause a change in the timing and location of spawning, the authors say.

Companion research says the tags recorded remarkable behaviour shifts among tuna breeding in this region, including shallower, more oscillatory diving and a tendency to stay near the surface. Lingering in the region, the courting and breeding fish also made more sinuous tracks.

As well, says lead author Steve Teo: "We found that bluefin get warm when they undergo courtship and our physiological measurements indicate they are vulnerable to overheating while in the Gulf of Mexico."

Gulf of Mexico eddies -- tornado-like features that move counter-clockwise and cause a retention of food -- may also play an important role in the bluefin's breeding process.

"The bluefin showed a preference for regions of the Gulf of Mexico -- information that can help map where they spawn," says Dr. Teo.

Funded by NOAA Fisheries, the National Science Foundation and the Packard, Pew, Disney and Monterey Bay Aquarium Foundations, the researchers say bluefin tuna breeding areas could be better protected thanks to tagging data showing where the species spawns from March to June. Past research showed breeding locations are similar to areas where the bluefin by-catch is high.

"Together these new reports help define where bluefin spawn and provide evidence for their trans-oceanic migrations. A fisherman from the Scandinavian Tuna Club might have chased the same giant bluefin as a Cuban fisherman," says Dr. O'Dor, a Dalhousie University professor and senior scientist of the Census of Marine Life.

"Part of the lesson here is that restoring bluefin tuna populations to health requires us to consider and manage activities one-fifth of the way around the world."

Tag-A-Giant program researchers are committed to obtaining the scientific data necessary to preserve the future of bluefin tuna in the North Atlantic and Pacific oceans. TAG scientists have placed electronic tags in over 1,300 bluefin tuna.