Social Behavior Can Make Predators Even Pickier; 'Dietary Conservatism Was Discovered Out Of The Blue' 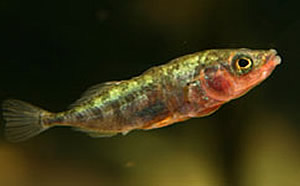 Research revealed in stickleback fish, even adventurous individuals can end up acting like their more selective peers

CARDIFF, U.K. -- Your greedy cat may turn up his nose at different food, but wild animals can be conservative when it comes to food choices too. And new research suggests that, in a group, even adventurous individuals can end up acting like their more selective peers.

In this new study, a team led by researchers from Cardiff University wanted to test whether shoals of stickleback would behave differently when faced with new types of food. They got the fish used to eating water fleas that had been colored brown or green, then introduced a 'novel' food in the shape of fleas of the other color.

In most cases the fish gobbled up the fleas indiscriminately. But a significant proportion played it safe and ate only the familiar color, allowing the novel flea population to flourish and eventually dominate.

This supports the idea that picky predators may strongly influence prey populations: unusual-looking prey are effectively protected from predators by their novelty, so numbers increase.

'The focus of this study was to examine whether social context influences individual foragers' behavior' explains Dr Rob Thomas of Cardiff University, a co-author of the report published in Behavioral Ecology.

Some individual animals naturally avoid new foods - a foraging strategy known as 'dietary conservatism' (DC). Within a group there will always be animals that eat anything (adventurous consumers - AC) and only a small proportion that are DC.

Having a mixture of AC and DC individuals in a group could be a way for animal populations to adapt to changes in the availability of prey.

The researchers had already seen DC behavior in individuals, but the sociable stickleback is usually found in shoals. Being part of a group has obvious benefits - for example you're less likely to be picked off by a predator so have more time for eating. But there are also costs - like increased competition for food.

To test for DC in shoals, the researchers put 60 individual sticklebacks and 61 shoals (of three fish) into tanks and got them used to feeding on water fleas that had been colored either brown or green. After a week, each fish was offered 19 of its familiar prey and one of the other, 'novel', color (or 57 familiar and 3 novel fleas for each shoal). After an hour, all remaining prey were removed and counted.

The following day, the fish were offered the two colors in proportion to the numbers of each left uneaten the day before. So if more of the novel prey color had survived, the fish would be given more of that color next time - effectively simulating how the two flea populations would breed in response to the pressure of predation by the sticklebacks.

For each tank the process continued until one flea color had reached 'fixation'- 100 per cent - and the other was extinct.

But in this experiment, 15 per cent of the shoals were sufficiently DC to drive the novel flea to fixation, suggesting that the shoals acted more like DC individuals than AC individuals.

'The surprise result for us was not to find evidence that the individual fish were having a different effect to the shoals,' says Thomas. 'You would expect shoals to have at least one AC individual which should make them more likely to drive the novel prey extinct.'

Scientists know that individual fish can learn from others in their group. In this case the results suggest that some fish that would otherwise eat anything have instead copied the DC behavior of their shoal mates. But the researchers don't yet know why.

'Dietary conservatism was discovered out of the blue,' says Thomas. 'This study focused on the selective pressure on prey, but there's lots more to find out. It would be good to look at the interactions between individual fish to see how they learn different behaviours from each other.'

This story is republished courtesy of Planet Earth online