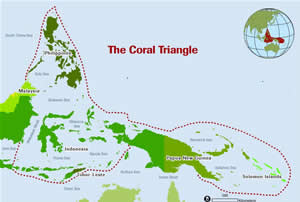 TOWNSVILLE, Australia -- Coral reef scientists and policy makers from the world's most prominent coral reef nations are meeting in Australia this week to develop urgent action plans to rescue the world's richest centre of marine biodiversity from gradual decline.

Human pressures on the Coral Triangle have raised grave concerns about the future of its fish, corals and other sea life, leading to a proposal by Indonesian President Susilo Bambang Yudhoyono for joint action by six governments, scientists, agencies and environmental non-government organisations of the region.

Marine scientists from the Australian Research Council Centre of Excellence for Coral Reef Studies (CoECRS) at James Cook University and the Australian Institute of Marine Science (AIMS) are assisting the largest reef conservation program ever undertaken, known as the Coral Triangle Initiative on Coral Reefs, Fisheries and Food Security.

The Coral Triangle (CT) spans Indonesia, Malaysia, the Philippines, Papua New Guinea, Timor Leste and the Solomon Islands, and has over 200 million inhabitants, a third of whom depend on the sea for food security or livelihood.

Spread over 5.7 million square kilometres, the CT has the highest diversity of marine life of any area on Earth. It contains three quarters of the world's known coral species, a third of the world's coral reefs, more than 3,000 species of fish and the world's richest mangrove forests. It generates $2.3 billion in sea products each year and is a major spawning ground for tuna and other valuable species.

These resources are under threat from a combination of over-fishing (including illegal fishing), coral bleaching and ocean acidification, pollution and sedimentation due to coastal development.

"Everyone recognises that coral reefs, and the economic and social benefits they generate, are at risk," CoECRS Director Professor Terry Hughes said. "Fish, corals and climate change don't respect national boundaries – so the need for region-wide action is paramount.

"This is a critical initiative by many countries, acting together for the first time, to sustain the livelihoods of millions of people," he said. "In developing countries, millions of local people suffer real hardship when reefs and ocean habitats are degraded. There is a social and economic imperative to protect them."

According to AIMS Acting Research Director Frank Tirendi, "Better collaboration between Coral Triangle experts and Australian experts may well be a fundamental requirement to ensure the knowledge base is in place to prevent an environmental crisis to our north and ensure longer term regional fisheries and food security".