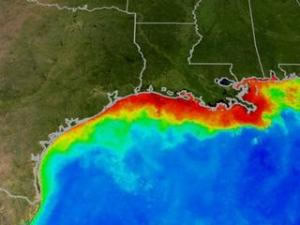 COPENHAGEN, Denmark -- Unchecked global warming would leave ocean dwellers gasping for breath. Dead zones are low-oxygen areas in the ocean where higher life forms such as fish, crabs and clams are not able to live. In shallow coastal regions, these zones can be caused by runoff of excess fertilizers from farming. A team of Danish researchers have now shown that unchecked global warming would lead to a dramatic expansion of low-oxygen areas zones in the global ocean by a factor of 10 or more.

Whereas some coastal dead zones could be recovered by control of fertilizer usage, expanded low-oxygen areas caused by global warming will remain for thousands of years to come, adversely affecting fisheries and ocean ecosystems far into the future. The findings are reported in a paper 'Long-term ocean oxygen depletion in response to carbon dioxide emissions from fossil fuels' published on-line in the scientific journal Nature Geoscience.

Professor Gary Shaffer of the Niels Bohr Institute, University of Copenhagen, who is the leader of the research team at the Danish Center for Earth System Science (DCESS), explains that "such expansion would lead to increased frequency and severity of fish and shellfish mortality events, for example off the west coasts of the continents like off Oregon and Chile".

He adds that "if, as in many climate model simulations, the overturning circulation of the ocean would greatly weaken in response to global warming, these oxygen minimum zones would expand much more still and invade the deep ocean." Extreme events of ocean oxygen depletion leading to anoxia are thought to be prime candidates for explaining some of the large extinction events in Earth history including the largest such event at the end of the Permian 250 million years ago.

Furthermore, as suboxic zones expand, essential nutrients are stripped from the ocean by the process of denitrification. This in turn would shift biological production in the lighted surface layers of the ocean toward plankton species that are able to fix free dissolved nitrogen. This would then lead to large, unpredictable changes in ocean ecosystem structure and productivity, on top of other large unpredictable changes to be expected from ocean acidification, the other great oceanic consequence of high atmospheric carbon dioxide concentrations from fossil fuel burning.

Professor Shaffer warns that as a result, "the future of the ocean as a large food reserve would be more uncertain. Reduced fossil fuel emissions are needed over the next few generations to limit ongoing ocean oxygen depletion and acidification and their long-term adverse effects".