Japanese Whalers, Greenpeace in Square Off in Ocean Battle Over Whales 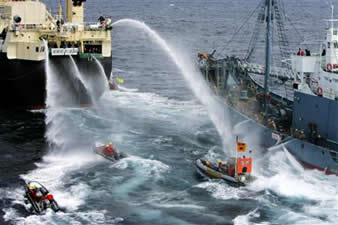 CANBERRA, Australia -- A Japanese whaling fleet and Greenpeace environmental activists are involved in a stand-off in the remote Southern Ocean near the coast of Antarctica with the two sides accusing each other of ramming their vessels.

Greenpeace said that after a month-long search it had tracked down six Japanese ships -- which set out on November 8 to conduct what Tokyo says is a scientific whaling program -- several thousand kilometers (miles) south of Perth.

Then several more "catcher boats", which had been whaling further away, returned with their load to the mother ship where the whales are cut up.

Japan abandoned commercial whaling in 1986 in line with an international moratorium and began what it calls a research program the following year. Critics said the program was a disguised commercial hunt for meat for upscale restaurants.

Despite international disapproval, Japan announced in June plans to nearly double its annual catch of minke whales to 850 and add fin whales and eventually humpbacks -- two types of whales conservationists say whose survival is threatened.

Australia is a staunch critic of Japan's whaling program and Prime Minister John Howard reiterated his opposition in a meeting with Japanese Prime Minister Junichiro Koizumi on the margins of a regional summit in Malaysia last week.

Howard warned both Greenpeace and the Japanese whalers on Thursday against any dangerous behavior.

"I do not support action which endangers lives or breaks the law," he told reporters in Sydney

The Japanese Fisheries Agency said it was the Greenpeace ship that had rammed the Japanese vessel and that it was considering filing criminal charges against some Greenpeace members who tried to make their way onto the Japanese ships.

"Our research whaling is in line with an international treaty and is perfectly legitimate," said Hideki Moronuki, head of the whaling section at the agency.

"We repeatedly announced this to the Greenpeace boats and sprayed water from our water cannons as a warning, but they ignored it all and rammed into our ship," he told Reuters.

Greenpeace said it planned to continue its action against the Japanese fleet for at least another month.

"As long we can maintain fuel supply in our vessels we think we can be down here for many, many weeks yet. The season goes right through until March and we are hoping to get in the way as much as we can," Greenpeace activist Shane Rattenbury told Australian radio via satellite phone from the Arctic Sunrise.