As Waters Clear, Scientists Seek To End A Muddy Debate; 'Sedimentology Of Milk' 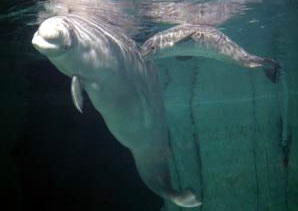 The first baby beluga whale born in captivity in Europe has died 25 days after being born.

Officials at the Oceanographic park in Valencia said Tuesday that the whale had died the previous day. They said

While the exact cause of the young mammal's death remained uncertain, "the incident probably occurred because the young whale never adapted to artificial milk," a park statement said.

The beluga's 8-year-old mother, Yulka, is the youngest whale to give birth in captivity.

Because of her inexperience, Yulka was unable to nurse her infant and stopped producing milk _ despite efforts by aquarium staff to pump milk from her mammary glands, said Pablo Areitio, director of biology, and Daniel Garcia, chief veterinarian at the marine park.

The baby beluga had suffered from an irregular swimming style and excessive buoyancy since his Nov. 2 birth.

While marine park staff were dismayed at the infant's death, it was not entirely unexpected, the statement said. During the first few months of life, offspring of first-time mothers have only a 42 percent chance of survival in a natural environment, park officials said.

The experience Yulka gained over the last several weeks may increase the survival chances of future offspring, officials said.