Tourism Official: Sipadan to Stay Open; 'I Don't Believe There is a Cover-up' 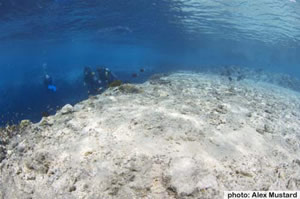 Although well-intended to boost the island's tourism, the contractor had to first secure permission from Sabah Parks headquarters for all transportation activities for the project

Parks officials would then supervise the movement of boats and materials into the island. This is where things supposedly went wrong.

It now appears that the contractor did not have permission to bring in the barge. Even it's application to bring in a "kumpit" (small indigenous boat) was not given until 16 May, 2006.

Attempts to get the contractor concerned for comments were unsuccessful.

May 13 to May 16 were days of full moon and high tides, but by May 14, the giant barge had already arrived, the sources said.

The "disaster" happened when the barge was beached to off-load the massive cargo of gravel, sand, steel tubes, iron mesh, prime movers a large bulldozer by means of an onboard giant crane.

"If indeed true that the company had brought in the steel barge without a permit, as alleged, then the contractor should be charged for encroachment as well as for any damage caused to Sipadan," said Kadir Omar, President of Malaysian Nature Society (MNS) Sabah branch.

"This is the view of Malaysian Nature Society because they have damaged a national icon, damaging the very attraction that Sipadan has to offer to the world," he said.

"The big question mark is if strict approval were needed for bringing in a small kumpit, why was such a huge monster mobilised without any permit?" Kadir asked.

Robert Lo, Managing Director of Sipadan Mabul Resort, is more pessimistic. "Not only the fantastic corals at the top of the Dropoff Point have been scraped off and flattened as seen on the Internet, but Sipadan's equally famous underwater cavern may now collapse because this giant barge is sitting right on top of it," he said.

Though the cave entrance is 60ft below water, its thinnest ceiling section is probably no more than 15-ft thick between it and the island's surface.

Terence noted that this underwater cavern was the very feature that attracted late dive legend Jacques Cousteau to Sipadan.

To the left of the main chamber is a big chamber called Turtle Cavern where some turtles end up getting lost and die, leaving behind their skeletal remains.

To the right is a tunnel which spirals downwards leading to the bottom, neither too deep not too shallow - a unique feature of Sipadan loved by many divers who actually use it to train for cave diving, four at a time the most .

"It is a very beautiful cave system about 100ft deep where the ceiling rises gradually inside and is very fragile," Robert said.

"This is why the barge must be pulled out immediately. It is in the wrong place," he said. "Once this roof collapses, it is too late," Robert added.

"We don't even allow our paying divers to stand on corals, but here a huge barge had scraped them off and is sitting on the coral reef," lamented Robert.

Terence Lim said below the big drop-off is the habitat which guarantees sighting of the spectacle of hundreds of giant humhead parrot fish which sets off to feeding from here early each morning, then swim towards Barracuda Point and around the islands reefs.

"So the Dropoff is the site where we will take our divers at 5.30am to see them come up to nibble at the coral tips before moving on and then return at night to sleep," Terence said.

"The wealth of spectacular corals at the Dropoff is the reason we see a diversity of hundreds of species of fish, large and small but much of that coral scene apparently and been scraped clean, judging from Andrea's (internet) pictures," he said.

"The Internet pictures also reveal a table coral completely covered by gravel which apparently fell from the barge ," Terance said.