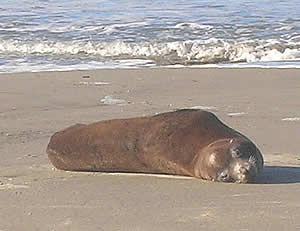 After its death, this California sea lion found on the Oregon coast tested positive for leptospirosis. photo by Carol Unser

NEWPORT, Oregon -- A sharp increase in the number of sick and dead California sea lions has been reported along the Oregon coast in recent weeks and necropsies conducted on dozens of the animals suggest that many may have died from leptospirosis.

Leptospirosis is a bacterial disease found in a variety of animal species and can be transmitted to humans, according to Jim Rice, an Oregon State University scientist who coordinates the statewide Oregon Marine Mammal Stranding Network.

"We are now getting calls for multiple sick or dead sea lions daily, which is higher than normal," said Rice, an OSU Marine Mammal Institute researcher who works at the university's Hatfield Marine Science Center in Newport. "The overall number of sea lions also has risen, so it's difficult to compare mortality rates from year to year, but certainly we're seeing an increase in animals that test positive for leptospirosis."

Rice and his colleagues at the stranding network have sent dozens of dead animals to the Veterinary Diagnostic Laboratory in OSU's College of Veterinary Medicine. And though not all of the animals have tested positive, many showed clear signs of leptospirosis, which raises concern about human health.

Kathy O'Reilly, who heads the bacterial section of the Veterinary Diagnostic Lab, said leptospirosis can be virulent.

"There have been 50 to 100 cases per year in the United States reported to the Centers for Disease Control," O'Reilly said, "and in 31 percent of the human cases it is traced back to contact with infected rats, and in 30 percent of the cases, it is tracked to infected dogs."

Dogs can be infected with leptospirosis through contact with stricken seal lions. Rice said coastal visitors should always avoid sea lions on the beach and during outbreaks of leptospirosis should keep their dogs on a leash. The disease can be transmitted by direct contact, or even through contact with damp sand, soil or vegetation contaminated by the urine of infected animals.

Rice said that in 2009, the network had 350 reports of California sea lions stranded on Oregon beaches â either dead or severely ill and presumed to have died. And Oregon is on pace to surpass that total this year, he pointed out.

"Typically, sea lions with leptospirosis are quite emaciated and lethargic," Rice said. "Those that don't die on the beach may get washed out to sea and die, or they may move elsewhere. It's possible that some recover, but these are very sick animals."

The Oregon Marine Mammal Stranding Network is a collaborative volunteer effort to respond to reports of sick or dead marine mammals â including whales, seals and sea lions â and report data about the strandings to the National Marine Fisheries Service. It is headquartered at OSU's Marine Mammal Institute at the Hatfield Marine Science Center and coordinated by Rice.