Researchers Get A Leg Up On Whale And Dolphin Evolution; 'There Is Deep Conflict In The Evolutionary Tree' 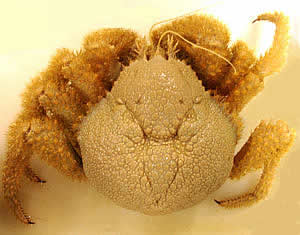 SOUTHAMPTON, U.K. -- Researchers from the National Oceanography Centre, Southampton, have drawn together 200 years' worth of oceanographic knowledge to investigate the distribution of a notorious deep-sea giant – the king crab. The results, published this week in the Journal of Biogeography, reveal temperature as a driving force behind the speciation and radiation of a major seafloor predator; globally, and over tens of millions of years of Earth's history.

In deep seas all over the world, around 100 species of king crabs live largely undiscovered. The fraction that we have found includes some weird and wonderful examples - Paralomis seagrantii has its eight walking legs and claws entirely covered in long fur-like setae; while related group Lithodes megacanthus grows to lengths of 1.5 metres, and has 15-20-cm long defensive spines covering its body. At temperatures of around 1- 4ÂºC, these crabs thrive in some of the colder waters on Earth; living and growing very slowly, probably to very old ages. Only in the cooler water towards the poles are king crabs found near the water surface – though temperatures found around some parts of the Antarctic (below 1ÂºC) are too extreme for their survival.

A paper, published 15 years ago in Nature is thought to show that king crabs evolved from shell-bound hermit crabs - similar to the familiar shoreline animals. Soft-bodied, but shell-free intermediate forms are found only in the shallow waters off Japan, Alaska, and Western Canada.

By looking at 200 years' worth of records from scientific cruises and museum collections, Sally Hall and Sven Thatje from the University of Southampton's School of Ocean and Earth Science at the National Oceanography Centre discovered that the soft-bodied forms can live at temperatures about ten degrees higher than the hard-bodied forms, but that both groups can only reproduce when temperature is between 1ÂºC up to 13-15ÂºC.

"It seems that most shallow-water representatives of this family are trapped in the coastal regions of the North Pacific because the higher sea surface temperatures further south prevent them from reproducing successfully and spreading," said Dr Thatje.

In order to leave this geographic bottleneck and spread around the world, the shallow water ancestors of current deep-sea groups had to go deep and adapt to the challenges of life in the deep sea. The process of adaptation to constant low temperatures (1-4ÂºC) prevailing in the deep sea seems to have narrowed the temperature tolerance range of the crabs where they have emerged to the surface waters in the Southern Hemisphere. With differences of only a couple of degrees in temperature affecting the distribution of the king crab, it is difficult to predict the consequences of range expansion in the warming waters around the Antarctic Peninsular region.

King crabs are of great commercial value, and fisheries are established in high latitude regions of both hemispheres. "Understanding their evolutionary history and ecology is key to supporting sustainable fisheries of these creatures," said research student Sally Hall: "Recent range extensions of king crabs into Antarctica, as well as that of the red king crab Paralithodes camtchaticus in the Barents Sea and along the coast off Norway emphasise the responsiveness of this group to rapid climate change."

This study elucidates temperature as a driving force behind the speciation and radiation of a major seafloor predator globally and over tens of millions of years of Earth's history.

The study has been supported by the National Environment Research Council (UK) through a PhD studentship to Sally Hall, and a Research Grant from the Royal Society awarded to Sven Thatje.