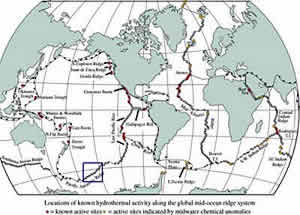 The Pacific Antarctic Ridge may be the site of a hydrothermal vent. The blue square is the site of the finding. credit Chris German and Karen Von Damm

NEW YORK, New York -- Scientists at Columbia University's Lamont-Doherty Earth Observatory have found evidence of hydrothermal vents on the seafloor near Antarctica, formerly a blank spot on the map for researchers wanting to learn more about seafloor formation and the bizarre life forms drawn to these extreme environments.

Hydrothermal vents spew volcanically heated seawater from the planet's underwater mountain ranges—the vast mid-ocean ridge system, where lava erupts and new crust forms. Chemicals dissolved in those vents influence ocean chemistry and sustain a complex web of organisms, much as sunlight does on land. In recent decades more than 220 vents have been discovered worldwide, but so far no one has looked for them in the rough and frigid waters off Antarctica.

From her lab in Palisades, N.Y., geochemist Gisela Winckler recently took up the search. By analyzing thousands of oceanographic measurements, she and her Lamont colleagues pinpointed six spots on the remote Pacific Antarctic Ridge, about 2,000 miles from New Zealand, the closest inhabited country, and 1,000 miles from the west coast of Antarctica, where they think vents are likely to be found. The sites are described in a paper published THIS WEEK in the journal Geophysical Research Letters.

"Most of the deep ocean is like a desert, but these vents are oases of life and weirdness," said Winckler. "The Pacific Antarctic ridge is one of the ridges we know least about. It would be fantastic if researchers were to dive to the seafloor to study the vents we believe are there."

Two important facts helped the scientists isolate the hidden vents. First, the ocean is stratified with layers of lighter water sitting on top of layers of denser water. Second, when a seafloor vent erupts, it spews gases rich in rare helium-3, an isotope found in earth's mantle and in the magma bubbling below the vent. As helium-3 disperses through the ocean, it mixes into a density layer and stays there, forming a plume that can stretch over thousands of kilometers.

The Lamont scientists were analyzing ocean-helium measurements to study how the deep ocean exchanges dissolved gases with the atmosphere when they came across a helium plume that looked out of place. It was in a southern portion of the Pacific Ocean, below a large and well-known helium plume coming off the East Pacific Rise, one of the best-studied vent regions on earth. But this mystery plume appeared too deep to have the same source.

Suspecting that it was coming from the Pacific Antarctic Ridge instead, the researchers compiled a detailed map of ocean-density layers in that region, using some 25,000 salinity, temperature and depth measurements. After locating the helium plume along a single density layer, they compared the layer to topographic maps of the Pacific Antarctic Ridge to figure out where the plume would intersect.

The sites they identified cover 340 miles of ridge line--the approximate distance between Manhattan and Richmond, Va.--or about 7 percent of the total 4,300 mile-ridge. This chain of volcanic mountains lies about three miles below the ocean surface, and its mile-high peaks are cut by steep canyons and fracture zones created as the sea floor spreads apart. It is a cold and lonely stretch of ocean, far from land or commercial shipping lanes.

"They haven't found vents, but they've narrowed the places to look by quite a bit," said Edward Baker, a vent expert at the National Oceanic and Atmospheric Administration.

Of course, finding vents in polar waters is not easy, even with a rough idea where to look. In 2007, Woods Hole Oceanographic Institution geophysicist Rob Reves-Sohn led a team of scientists to the Gakkel Ridge between Greenland and Siberia to look for vents detected six years earlier. Although they discovered regions where warm fluids appeared to be seeping from the seafloor, they failed to find the high-temperature, black smoker vents they had come for. In a pending paper, Sohn now says he has narrowed down the search to a 400-kilometer-square area where he expects to find seven new vents, including at least one black smoker.

The search for vents off Antarctica may be equally unpredictable, but the map produced by the Lamont scientists should greatly improve the odds of success, said Robert Newton, a Lamont oceanographer and study co-author. "You don't have to land right on top of a vent to know it's there," he said. "You get a rich mineral soup coming out of these smokers—methane, iron, manganese, sulphur and many other minerals. Once you get within a few tens of kilometers, you can detect these other tracers."

Since the discovery of the first hydrothermal vents in the late 1970s, scientists have searched for far-flung sites, in the hunt for new species and adaptive patterns that can shed light on how species evolved in different spots. Cindy Van Dover, a deep sea biologist and director of the Duke University Marine Laboratory, says she expects that new species will be found on the Pacific Antarctic Ridge, and that this region may hold important clues about how creatures vary between the Indian and Pacific Oceans, on either end.

"These vents are living laboratories," said Van Dover, who was not involved in the study. "When we went to the Indian Ocean, we discovered the scaly-foot gastropod, a deep-sea snail whose foot is covered in armor made of iron sulfides. The military may be interested in studying the snail to develop a better armor. The adaptations found in these animals may have many other applications."