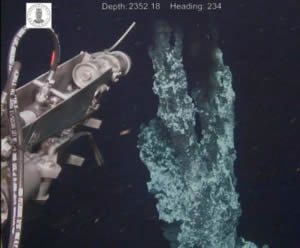 The top three feet of a chimney nearly 40 feet tall, part of the northernmost hydrothermal vent field yet seen. Credit: Centre for Geobiology

SEATTLE, Washington -- Well inside the Arctic Circle, scientists have found black smoker vents farther north than anyone has ever seen before. The cluster of five vents – one towering nearly four stories in height – are venting water as hot as 570 F.

Dissolved sulfide minerals that solidify when vent water hits the icy cold of the deep sea have, over the years, accumulated around the vent field in what is one of the most massive hydrothermal sulfide deposits ever found on the seafloor, according to Marvin Lilley, a University of Washington oceanographer. He's a member of an expedition led by Rolf Pedersen, a geologist with the University of Bergen's Centre for Geobiology, aboard the research vessel G.O. Sars.

The vents are located at 73 degrees north on the Mid-Atlantic Ridge between Greenland and Norway. That's more than 120 miles from the previous northernmost vents found during a 2005 expedition, also led by Pedersen. Other scientists have detected plumes of water from hydrothermal vents even farther north but have been unable to find the vent fields on the seafloor to image and sample them.

In recent years scientists have been interested in knowing how far north vigorous venting extends. That's because the ridges where such fields form are so stable up north, usually subject only to what scientists term "ultra-slow" spreading. That's where tectonic forces are pulling the seafloor apart at a rate as little as 6/10th of an inch in a year. This compares to lower latitudes where spreading can be up to eight times that amount, and fields of hydrothermal vents are much more common.

The active chimneys in the new field are mostly black and covered with white mats of bacteria feasting on the minerals emitted by the vents. Older chimneys are mottled red as a result of iron oxidization. All are the result of seawater seeping into the seafloor, coming near fiery magma and picking up heat and minerals until the water vents back into the ocean. The same process created the huge mound of sulfide minerals on which the vents sit. That deposit is about 825 feet in diameter at its base and about 300 feet across on the top and might turn out to be the largest such deposit seen on the seafloor, Lilley said. Additional mapping is needed.

"Given the massive sulfide deposit, the vent field must surely have been active for many thousands of years," he said.

The field has been named Loki's Castle partly because the small chimneys at the site looked like a fantasy castle to the scientists. The Loki part refers to a Norwegian god renowned for trickery. A University of Bergen press release about the discovery said Loki "was an appropriate name for a field that was so difficult to locate."

Indeed this summer's expedition and the pinpointing of the location of the vents earlier this month follows nearly a decade of research. Finding the actual field involved extensive mapping. It also meant sampling to detect warm water and using optical sensors lowered in the ocean to determine the chemistry, both parts that involved Lilley. He said a key sensor was one developed by Ko-ichi Nakamura of the National Institute for Industrial Science and Technology, Japan, that detects reduced chemicals that are in the water as a result of having been processed through a hydrothermal vent.

A remotely operated vehicle was used to finally find the vents. The difficulties of the task are described in an expedition Web diary, see "Day 17: And then there were vents" at http://www.geobio.uib.no/View.aspx?mid=1062&itemid=90&pageid=1093&moduledefid=71.

The area around the vents was alive with microorganisms and animals. Preliminary observations suggest that the ecosystem around these Arctic vents is diverse and appears to be unique, unlike the vent communities observed elsewhere, the University of Bergen press release said. The expedition included 25 participants from five countries.