Study: Seeping Arctic Methane Has Serious Implications For Florida Coastline; 'It May Not Be There For Your Grandchildren' 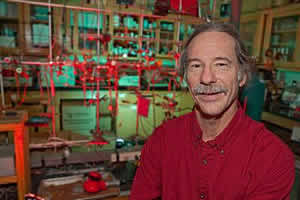 TALLAHASSEE, Florida -- The ancient reserves of methane gas seeping from the melting Arctic ice cap told Jeff Chanton and fellow researchers what they already knew: As the permafrost thaws, there is a release of methane, a powerful greenhouse gas that causes climate warming.

The trick was figuring out how much, said Chanton, the John W. Winchester Professor of Oceanography at Florida State University.

The four-member team â whose findings were published in the respected journal Nature Geoscience (http://www.nature.com/ngeo/journal/vaop/ncurrent/abs/ngeo1480.html) â documented a large number of gas seep sites in the Arctic where permafrost is thawing and glaciers receding (they found 77 previously undocumented seep sites, comprising 150,000 vents to the atmosphere). Until recently, the cryosphere (frozen soil and ice) has served to plug or block these vents. But thawing conditions have allowed the conduits to open, and deep geologic methane now escapes.

The team studied the link between natural gas seepage and the melting ice cap, using aerial photos and field data to figure out the number â and location â of seep holes.

So, here's the rub: The more the ice cap melts, the more methane is released into the atmosphere â and the more the climate warms.

Why should this matter to you?

People who live in coastal areas in Florida could be directly affected, said Chanton, who analyzed the methane and dated it to more than 40,000 years old.

"Methane is a very strong greenhouse gas that's grown three times faster than carbon dioxide since the industrial era," Chanton said. "As the Arctic warms, the ice caps melt and the fissures open, so methane escapes and causes more warming."

This phenomenon causes sea levels to rise, which is particularly problematic in Florida:

"Along the flat Florida coastline, a 1-foot rise in sea level could cause anywhere from 10 to 100 feet of shoreline retreat â erosion," Chanton said. "For us here in Florida, this is really important because we can expect the coast to recede."

That beach house, he warned, might be in peril: "It may not be there for your grandchildren."