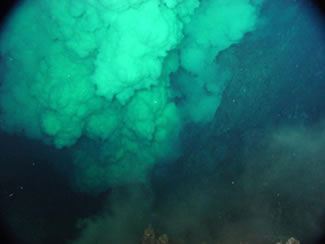 NEWPORT, Oregon -- An international team of scientists has presented its findings from the first observations of the eruption of a submarine volcano that in 2004 and 2005 spewed out plumes of sulfur-rich fluid and pulses of volcanic ash 550 meters below the ocean's surface near the Mariana Islands northwest of Guam.

Those findings will be published Thursday in Nature - just after many of those same scientists returned from another expedition to the site, where they observed new bursts of erupting lava.

The researchers have now observed eruptive activity at the site during three separate visits over a period of more than two years, suggesting that these types of deep-sea volcanoes erupt chronically for longer periods than other undersea volcanoes located on the mid-ocean ridge. The eruptive activity they just observed at a volcano dubbed Northwest Rota-1 was explosive, but provided some of the closest observations ever of a volcano, thanks to the help of an underwater robot.

"We were forced to evacuate the remotely operated vehicle, 'Jason II,' several times to avoid getting it enveloped in volcanic clouds," said Bill Chadwick, an Oregon State University volcanologist and one of the authors of the study. "But at other times, we could observe the eruption from only 10 feet away - something you could never do on land. So in some ways, we were able to see processes more clearly at the bottom of the ocean than we ever could on land. That was surprising."

In their Nature article, the authors outline their 2004 discovery of an active crater on the south side of Rota's summit they named "Brimstone Pit" that was discharging a "pulsating, opaque, yellowish smoky plume with characteristics unlike any known hydrothermal plumes." The plume would fluctuate in volume and intensity, punctuated by explosions of sulfurous clouds.

The researchers also describe their return visit to the site in 2005, when Rota showered their ROV with volcanic "bombs," globs of semi-molten sulfur and debris about 15 centimeters in size that shot out 50 meters above Brimstone Pit.

The science team also found microbial mats and hydrothermal vent-dependent animals on Rota, including two different species of alvinocaridid shrimp that numbered as many as 200 per square meter. This year, they found that at least one of the shrimp species was supplementing its diet by eating dead mid-water fish that fell to the seafloor - apparently killed by the toxic cloud above the volcano.

The study outlined in the Nature article was part of the 2004 Submarine Ring of Fire program, supported by the National Oceanic and Atmospheric Administration and the Canadian Natural Sciences and Engineering Research Council, and from an expedition in 2005 sponsored by the Japanese Agency for Marine-Earth Science and Technology.

The lead author of the paper was Robert Embley, a geophysicist with NOAA's Pacific Marine Environmental Laboratory. Chadwick, the second author, is affiliated with the Cooperative Institute for Marine Resource Studies, a joint OSU-NOAA program. Both work out of OSU's Hatfield Marine Science Center in Newport, and are adjunct professors in OSU's College of Oceanic and Atmospheric Sciences.

Four other research assistants from the CIMRS program at the Hatfield Marine Science Center were on the 2006 cruise: Leigh Evans, Ron Greene, Susan Merle and Andra Bobbitt.

The 2006 return to Rota was jaw-dropping, the researchers said.

"We saw features of submarine volcanic activity never before directly observed, including explosions of lava from a crater accompanied by a red glow and voluminous volcanic gases and ejected rocks," Embley said.

Sounds of the eruptive activity were recorded on a portable hydrophone placed on the nearby seafloor.

On another volcano called Daikoku, in the northern part of the Mariana volcanic arc, the researchers discovered a pool of molten sulfur at a depth of 420 meters. It was measured at 187 degrees Celsius.

"It was a sulfur pond with a flexible 'crust' that was moving in a wavelike motion," Chadwick said. "The movement was triggered by continuous gases being emitted from beneath the pool and passing through the sulfur. It was a riveting sight."

The work is significant because the geology of the Mariana arc, which includes Saipan and Iwo Jima as well as Guam, is similar to that of the Cascade Mountain Range of the Pacific Northwest and provides clues to terrestrial volcanic activity. Mount St. Helens, for example, lies within the Cascades. Both are on the Pacific "Ring of Fire" and, in each case, an oceanic plate is being subducted beneath another plate, causing a string of volcanoes above where the plate begins to melt.

The deep-sea vents located near the undersea volcanoes may also harbor clues to the origin of life on Earth, many scientists believe.

While much of the focus has been on Rota, because of its recent volcanic activity, the researchers have surveyed more than 50 submarine volcanoes in the Mariana arc. At some of the sites they observed in 2004 using an ROV, they discovered black "smokers" - chimneys made from spewing minerals and hydrothermal vents. Most such vents are deep in the ocean, but they found some on the shallow summits of volcanoes with schools of tropical fish, tuna and sharks swimming nearby.

"As the ROV came closer to the surface, where the sunlight was able to penetrate, it was just a riot of life with incredible amounts of fish and corals," Chadwick said. "But what was truly unique was that two fundmentally different kinds of ecosystems were overlapping here - one based on sunlight and one based on chemicals."