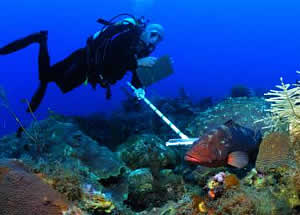 Scientists has solved a conundrum that has stumped marine biologists for years -- how to accurately count reef fish. Credit: Jiangang Luo

MIAMI, Florida -- Marine biologists have solved a conundrum that has stumped them for years â how to count reef fish. It may sound simple, but the task is actually complex and critical in helping to evaluate the state of our oceans, coral reefs and the marine life that populate them.

In an article published in the journal Fisheries Research scientists from the University of Miami (UM) and NOAA Fisheries Service have collaborated to create a framework that extends and increases the effectiveness of reef monitoring techniques. The new methodology uses a probabilistic survey approach to more precisely count the numbers of fish in an efficient and cost-effective manner. The framework can be used to determine management strategies best suited to ensure the long-term sustainability of reef resources â whether in the Florida Keys, Hawaii or in the Indo-Pacific's Coral Triangle.

"The results of this study can be used to support stock assessments of principal exploited species, evaluate the performance of 'no-take' marine reserves, and assess community health for many non-target reef fish species," said Steven Thur, acting manager of NOAA's Coral Reef Conservation Program. "This is a great example of science directly feeding into management decisions, finding research efficiencies, and of successful collaboration across federal, state, and academic lines so we invest our funds in areas of greatest importance."

"This program started when it became obvious that we could not evaluate coral reef fish populations by simply counting how many fish were being landed at the dock," said Bohnsack. "We knew that we could see and measure many more fish than we could ever capture and that we need to be able to use non-destructive assessment methods. At first our interest was on individual reefs, but later expanded to much larger areas as we learned more."

In the early years, a technique using scientific divers was developed to reliably count the number and sizes of reef fish by species. In the mid-90's a statistical method was developed to link diver visual counts and advanced mathematical calculations in a rigorous sampling process. This involved dividing the entire Florida Keys reef ecosystem into small sections classified according to simple features like soft and hard bottom, coral, and other features that related to where fish might live. Within each type of habitat a random process was used to select which areas were sampled by divers. This monitoring framework allowed the researchers to calculate the abundance and size-structure of more than 250 exploited and non-target reef fishes from Miami to Key West and out to the Dry Tortugas.

"Through our collaborative work we were able to create a framework that brings together cutting edge techniques in underwater sampling, coral reef mapping and statistical survey design that will serve us well as our marine resources continue to be impacted by fishing, habitat degradation and environmental changes," Smith said.

Although the team began using its theories in the Florida Keys, the new framework is fully transferable to other U.S. coral reef ecosystems and areas around the globe.

"We have already been using this methodology in the Northwestern Hawaiian Islands to assess multispecies reef fish populations, and federal and local management agencies are extremely pleased with the results of these efforts," said Ault. "We hope to employ this approach in new areas in order to have a single, quantitative framework to assess coral reefs at local, regional, national, and international spatial scales."