Researchers: Seas Could Rise Dramatically in Rapid Ice Melt; 'What We are Doing is Irreversible' 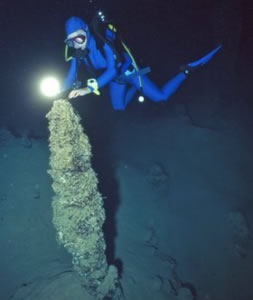 Fabrizio Antonioli dives in the submerged caves to analyse the stalagmites.

CANBERRA, Australia -- The world’s ice sheets might melt much faster than previously thought, according to a new study that used submerged stalagmites to provide some of the first firm evidence of ancient sea level rise.

Researchers from Australia and Europe dated the age of stalagmites that grew in submerged coastal cave in Italy to reconstruct exactly when sea level was above the cave and when it was below. Their findings are published online in the journal Nature Geoscience today.

“When sea level was high and the caves were inundated, these submerged stalagmites were colonized by aquatic worms that secrete calcite,” explains lead author Dr Andrea Dutton from The Australian National University. “The worms left behind stalagmites that were encased in fossil worm tubes, which gave us direct evidence for the presence of seawater in the cave.”

The findings provided a window into a period of time from about 190,000 to 245,000 years ago, showing that there were three warm periods associated with three peaks in sea level.

Dr Dutton said the stalagmites are very rare specimens that provide important benchmarks and checks for sea level modelling. She said until now most of the direct evidence of sea level position is only from the past 20,000 years, so this study is a rare opportunity to investigate a well-preserved archive that records multiple oscillations in sea level during warm periods of Earth’s history.

“Our ability to understand present and future changes in global sea level is determined largely by our knowledge of the relation between sea level and climate oscillations that occurred in the past,” Dr Dutton said. “One of our goals is to understand how quickly the ice sheets melt and how quickly sea level rises in response to increases in temperature and atmospheric CO2.”

“The importance of this work is that the lag time between changes in temperature and sea level response may not be as long as previously thought, meaning that ice-sheets are capable of responding quickly to increasing temperature and CO2.”

“Our findings also support the idea that the sensitivity of ice sheets to climate change is partly a function of the size and configuration of the ice.”

The research team plan to study submerged stalagmites across a wider range of depths to gain a better understanding of the rate of sea level change through time. The team included Dr Tezer Esat (now at ANSTO), Professor Kurt Lambeck and Professor Malcolm McCulloch from the Research School of Earth Sciences at ANU, Dr Edouard Bard from CEREGE in France, and Dr Fabrizio Antonioli from ENEA in Italy.