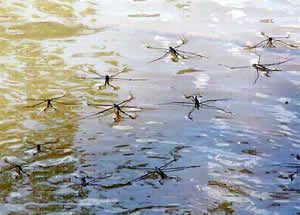 While in Thailand, a University of Missouri-Columbia researcher found a treasure-trove of previously unknown information about aquatic insects in the country. In the process, he learned firsthand that a few of these little critters pack quite a punch when they bite.

"It's much, much worse than a bee or wasp sting," said Robert Sites, an entomologist in the College of Agriculture, Food and Natural Resources at the University of Missouri-Columbia. "It's actually not a sting; it's a bite. You'll be thinking about it a half hour or an hour. I was bitten in the pad of my little finger, and I felt intense pain all the way to my elbow for a good 30 minutes."

Working with researchers from universities in Thailand, Slovenia and the United States, Sites discovered more than 50 new insect species over a three-year period. His observations, which were funded by a grant from the National Science Foundation, took place in national parks around the country and focused on insects living in mountainous streams and waterfalls.

Of the discoveries, Sites has formally described 12 of the new insects and prepared written detailed analyses of their physical characteristics, which includes the colors and sizes of their heads, wings and legs, along with numerous other distinctive features. He said six belong to the family Gerridae, commonly referred to as water striders; the remaining are members of the family Aphelocheiridae. Despite the painful bite, none are dangerous to humans, Sites said.

Each is related to insect species that are found in other parts of the world - including the United States. Sites said the new insects, which possess names like Eotrechus elongatus and Ptilomera tennaserim, serve no specific ecological purpose other than to eat and reproduce.

"From a scientific perspective, they're all cool," he said. "Unfortunately, people always want to know what good are they; what is their purpose. They're just part of the ecosystem, part of nature. They don't have a particular purpose for humanity. They're predacious insects. They feed on other insects that they can overpower in the streams. Some even eat small fish. They're pretty ferocious predators."

Sites' findings and descriptions of the insects are being published on an on-going basis. His most recently published study, "A Review of Ptilomera (Heteroptera: Gerridae) in Thailand, with Descriptions of Three New Species," appeared in the March issue of Annals of the Entomological Society of America.