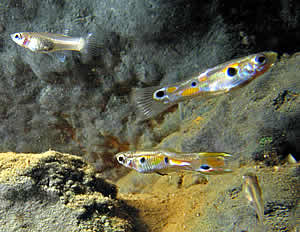 RIVERSIDE, California -- How fast can evolution take place? In just a few years, according to a new study on guppies led by UC Riverside’s Swanne Gordon, a graduate student in biology.

Gordon and her colleagues studied guppies — small fresh-water fish biologists have studied for long — from the Yarra River, Trinidad. They introduced the guppies into the nearby Damier River, in a section above a barrier waterfall that excluded all predators. The guppies and their descendents also colonized the lower portion of the stream, below the barrier waterfall, that contained natural predators.

Study results appear in the July issue of The American Naturalist.

Natural guppy populations can be divided into two basic types. High-predation populations are usually found in the downstream reaches of rivers, where they coexist with predatory fishes that have strong effects on guppy demographics. Low-predation populations are typically found in upstream tributaries above barrier waterfalls, where strong predatory fishes are absent. Researchers have found that this broad contrast in predation regime has driven the evolution of many adaptive differences between the two guppy types in color, morphology, behavior, and life history.

Gordon’s research team performed a second experiment to measure how well adapted to survival the new population of guppies were. To this end, they introduced two new sets of guppies, one from a portion of the Yarra River that contained predators and one from a predator-free tributary to the Yarra River into the high-and low-predation environments in the Damier River.

They found that the resident, locally adapted guppies were significantly more likely to survive a four-week time period than the guppies from the two sites on the Yarra River. This was especially true for juveniles. The adapted population of juveniles showed a 54-59 percent increase in survival rate compared to their counterparts from the newly introduced group.

“This shows that adaptive change can improve survival rates after fewer than ten years in a new environment,” Gordon said. “It shows, too, that evolution might sometimes influence population dynamics in the face of environmental change.”