Record Breaking Underwater Camera To Be Showcased To Public; 'The Only Device Of Its Kind In The World' 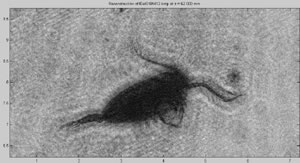 ABERDEEN, U.K. -- A revolutionary underwater camera, which has plunged to record breaking depths below the surface of the North Sea, will be showcased to members of the public at a key science event in Aberdeen next week.

The only kit of its kind in the world, the eHoloCam is a 3D holographic camera used to capture images of underwater organisms and living particles to provide scientists with a greater understanding of marine life.

The camera produced the deepest hologram ever to be recorded, travelling 450 meters below the surface of the North Sea, when it was deployed by the RV Scotia, a research vessel owned by the Fisheries Research Services Marine Laboratory in Aberdeen in March 2007.

The researchers are one of only three groups across the globe to conduct studies into marine environments using cutting edge underwater holographic equipment.

Innovate with Aberdeen presents an exclusive opportunity for the public to discover more about the invaluable role the equipment plays in better understanding changes and developments in the health of our oceans, as Professor John Watson, Department of Engineering, University of Aberdeen, who leads the project explains:

"As the only device of its kind in the world, the eHoloCam is a truly pioneering tool which allows us to research and record underwater environments in an entirely non-intrusive and non-destructive way.

"The camera records 3D holograms of tiny subsea organisms such as plankton that hold crucial indicators and clues to increase our understanding our oceans, and most importantly the impact on our global environment. Detailed holographic images of these organisms, which range in size from a few microns to several millimetres, are essential for the marine biology community, providing vital information which would otherwise by difficult or impossible to extract."

"With a capacity to operate in depths down to 2000 metres, deeper than any other equipment of its kind, the eHoloCam has been deployed on four journeys to date in both North Sea and North Atlantic waters from the RV Scotia research vessel. Over 290 digital holographic videos have been recorded to date each containing several thousand individual holograms of plankton and other marine organisms and particles."

The eHoloCam was developed by the research team at the University, in collaboration with CDL in Aberdeen who specialise in offshore instrumentation and Elforlight of Daventry, developers of novel solid state lasers.

The eHoloCam is an ideal of example of the strength of academic and industrial collaboration Malcolm Stone, Development Officer North of Scotland KTP (Knowledge Transfer Partnership) Centre, who will also present at Innovate in Aberdeen said:

"This has been an exciting and challenging project which has clearly demonstrated how collaboration can deliver tremendous scientific results and solid commercial innovation."

Innovate with Aberdeen is the third in a series of twice yearly University of Aberdeen events which showcase groundbreaking research and technologies and offer the business community collaborative opportunities.

The University of Aberdeen has a long and successful history of collaborating with businesses and organisations to produce step changes in technology, business processes and creating operational efficiencies. Knowledge Transfer Partnerships have been a key mechanism for this success, delivering results for a wide range of sectors, most notably energy, medical, aquaculture and the public sector.

Representatives from the North of Scotland Knowledge Transfer Partnership Centre will exhibit at Innovate with Aberdeen.

Innovate takes place on September 18 at Elphinstone Hall, King's College, University of Aberdeen. Visitors can take their laptop as the facility has wi-fi.