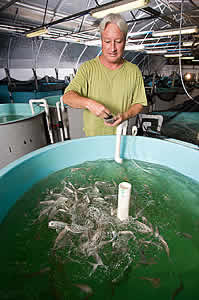 FRANKLIN, Maine -- Imagine you are invited to a buffet lunch and the only thing on the menu is a food you don't enjoy. How much do you think you will eat? While it may qualify as a wonderful, nutritious food, you won't necessarily partake.

Now, imagine you are a fish in a tank full of feed you won't touch.

Reducing reliance on captured marine fish proteins and oils for fish feeds is an important goal in aquaculture. But fish are picky about their feed, and fish nutritionists need to find nutritious feeds, low in fishmeals and oils, that fish will eat.

Feed provides the nutrients required for building and sustaining life. If fish don't eat well, they won't grow and thrive. Commercial fish farms rely on feeds that now include fishmeal as a major source of protein and oil. The protein- and lipid-rich feed pellets used for farmed fish have traditionally been made in part from small, bony fish species, like menhaden, herring, and capelin.

Pet food and diets for swine and poultry have also traditionally used fishmeal and oil. And as more people around the globe turn to fish as a source of lean protein, they drive the growth of aquaculture worldwide; aquaculture now supplies half of the seafood produced for human consumption.

Thus, the demand for proteins and lipids for fish diets has increased while the supply of marine fishmeal has not increased, causing more pressure and price increases on the limited supply of fishmeal. Replacements for fishmeal and fish oil are needed to support sustainable aquaculture.

Agricultural Research Service (ARS) aquaculture scientists are working to develop fish feeds that don't include fishmeal. Since November 2007, the U.S. Department of Agriculture (USDA) and the National Oceanic and Atmospheric Administration have been engaged in the Alternative Feeds Initiative to accelerate development of other feeds for aquaculture. The initiative's purpose is "to identify alternative dietary ingredients that will reduce the amount of fishmeal and fish oil contained in aquaculture feeds while maintaining the important human health benefits of farmed seafood."

Developing alternative ingredients that are produced in sufficient quantities to become standard components of diets is a key research priority, requiring understanding of an ingredient's nutritional value, its ability to blend with other ingredients, its effect on pellet stability, and, of course, its appeal to fish.

Different species of fish not only have different nutritional requirements, but they also seem to have different palate requirements. In Hagerman, Idaho, ARS fish physiologist Rick Barrows is tasked with formulating and manufacturing feeds for several fish species, including trout, salmon, white seabass, and yellowtail. Barrows and his ARS collaborators have developed many different formulations for these fish depending on their stage of development, from fry (baby fish) to adults. Barrows produces the feed himself using a piece of food-manufacturing equipment called a "cooking extruder."

"My colleagues and I are open to looking at a variety of ingredients for fishmeal replacement, including plants, animal processing products, and even single-cell organisms like yeast and bacteria," says Barrows. "We conduct not only growth studies but also palatability studies to ensure fish will eat the nutritious feed."

William Wolters, research leader and director of the ARS National Cold Water Marine Aquaculture Center in Franklin, Maine, is collaborating with Barrows to develop diets for Atlantic salmon using concentrated plant proteins. Protein levels in most grain and oilseed sources are low and need to be concentrated to reach the high protein requirements of fish. Current studies are evaluating six experimental diets, containing combinations of alternative proteins, and a fishmeal control diet being fed to fish in 15 tanks with automatic feeders.

Salmon spend 1Â½ years in the hatchery and then 1Â½ to 2Â½ years growing to adult size. According to the Maine Aquaculture Association (MAA), there are about 1,300 acres of marine waters leased in the state for aquaculture purposesâ600 acres for finfish. Salmon is a large commodity in Maine aquacultureâannually producing between 25 and 35 million pounds.

"The issue of substitutes for fishmeal and oil as feed ingredients is a very important one that cuts across many finfish species," says MAA executive director Sebastian Belle. "The work that Dr. Wolters is doing on salmon feeds, in cooperation with Dr. Barrows, is groundbreaking and, if successful, will be very helpful to domestic growers in meeting the challenge of limited fishmeal and oil supplies. Worldwide, these supplies are limited, and as aquaculture increases we must find alternative feed ingredients that satisfy the fishes' nutritional needs while resulting in a product with the appropriate nutritional qualities for humans."

Providing Nutrients for a Hungry Species

"Pompano are voracious eatersâespecially larvae and juveniles," says Riche, "so much so that they will eat beyond being satisfied. This eating behavior is reflected in larval and juvenile growth."

Barrows, Riche, and other ARS researchers are developing a nutrient-availability database of different ingredients that have potential to replace fishmeal. "Nutrient availability" describes how much of the ingredient is available to the animal for sustenance. "There are currently 17 ingredients in the database for pompano," says Riche.

While fishmeal can largely be replaced without harming fish health, fish oils are not so easily replaced. "Plant oils are now being identified that could possibly replace or substantially reduce the use of fish oils in feed products," says Riche.

Algae may have the potential to replace fishmeal completely in some fish feed and perhaps replace some of the fish oils. Under a cooperative research agreement with Kent Bioenergy of San Diego, California, Barrows is investigating the useâin fish feedâof protein coproducts that result from biodiesel production from algae.

Bioenergy production from algae is a growing industry: A few years ago there were 12 companies producing ethanol this way; last year there were 100, and 350 are projected to be in existence by the end of 2010.

Barrows and corporate collaborator Carbon Capture Corporation in Imperial Valley, California, are using algae to create fishmeal-free diets for California yellowtail and white seabass. "We are finding that algal feeds could be competitively priced, contain fewer contaminants, result in fewer nutrients in fish effluent, and be sustainable," says Barrows.

Sometimes palatability is a hurdle when feeding a new type of feed to fish. "But," says Barrows, "it appears that dried algae as fish feed actually increases fish appetite. When we formulate a new feed, we test trout first in our palatability studies, since they are aggressive eaters. If trout eat the feed, we then test it on other species."

This work is pivotal to the feed-manufacturing business. According to Barrows, "ARS is exploring ingredients and combinations and developing gateway formulas to prove the concept of fishmeal-free feeds. This eliminates the risk commercial feed developers would usually carry. Now feed companies can use ARS fishmeal-free feed as a basis for their own fish-feed formulas."