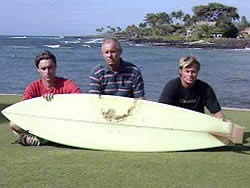 Kenny Doudt with his sons

KAUAI, Hawaii -- Kenny Doudt talks about the longest 15 seconds of his life. It happened 25 years ago in the split second moments when he found himself in the jaws of a great white shark. The attack happened in the chilly waters off the coast of Oregon.

November 27th, 1979 was a crisp day with waves breaking at Doudt's favorite surf spot off Cannon Beach on the Oregon Coast.

"I'm laying on it just like this paddling out. It's top jaw got my back," recounts Doudt.

The shark's sharp teeth sliced through Doudt's wetsuit. He appears to take pride in showing where the shark bit through the thick material. "This is the back of the wetsuit and this is the bitemark on my back".

The shark left a 15 inch scar on his back.

Doudt explains, "When he first got me -- comes out water and takes me like this. Takes me underwater as I'm prone on board paddling out."

Judging from the teeth marks, the shark that attacked Doudt weighed upwards of 3,500 pounds and was at least 17-feet-long.

The shark left a jaw imprint on Doudt's surfboard.

"Those are his front teeth. You can see how the board is gouged. And see those slices. That's when I'm in his mouth and he's shaking me back and forth. Those are the teeth going back and forth," says Doudt.

The shark had him for about 15 seconds, then let him go. Doudt says at that point, "I had already said my prayers and was ready to die. I said see you later you know".

Fellow surfers saw the shark attack and rushed to help.

"When I made it to shallow water I was laying there. They thought I was okay until they turned me over and my whole wetsuit flaps open - and blood pours out".

Doudt says he died twice, and only had a pint of blood left in him.

But he says he fought to stay alive for his little boys.

"Oh, I totally need to raise those boys. That was a big part of why I survived," recalls Doudt.

Now his sons are grown and Doudt is now a grandfather. He surfs with his boys on Kauai these days. He says surfing was the best therapy during his long recovery.

"Surfing has been healing for me."

Looking back on the day a great white left him for dead, Doudt says, "It was just my lucky day to survive."

Doudt wrote a book about surfing with a great white. He also is available as a motivational speaker.

You can find out more about Kenny by visiting his website, www.shark-bite.com.