Dive, He Said: Local Hero Richard Jones Dives to Save His Neighborhood in the Wake of Hurricane Katrina 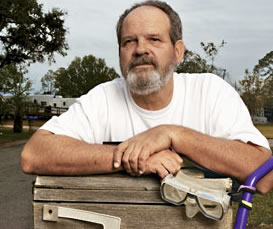 Richard Jones in front of his house

BILOXI, Mississippi -- The ceiling of Richard Jones' house in Biloxi, Miss., had just caved in, revealing that his roof had been torn away. That was the good news. Half a mile away on that afternoon of Aug. 29, as Hurricane Katrina sent up 30-ft. storm surges, Jones, 53, knew a flood was raging in from the Bay of Biloxi because the water was rising rapidly in the storm drain on his street. But what worried the high school history teacher more was the debris clogging a larger storm drain nearby, part of a network designed to draw off flooding from Biloxi's coastal areas. If the drains didn't function, Jones knew, then inland neighborhoods like his would be violently deluged.

That's when Jones' hobby turned into gallantry. Six years ago, Jones had taken up scuba diving. As the floodwaters arrived, he donned his swim trunks, scuba mask and snorkel and stepped outside into winds of more than 100 m.p.h., punctuated by the rumble of passing tornadoes. "I was more worried about flying debris than I was about what was beneath the water I was walking into," says Jones, who usually dives off placid sites like Key West, Fla., and Cozumel, Mexico. Still, the rising tide was "real dark, murky and stinky." He plunged inâat one point stepping perilously into a deep hole left by a water meter the hurricane had torn outâfound the drain, dived and cleared it. The waters began to recede, and Jones' neighborhood was spared the disaster that destroyed hundreds of other Biloxi homes and took scores of lives.

Fearing just that, neighbor Sharon Parker had 13 family members huddled in her house. Then, says Parker, 47, "we saw Richard wearing his gear and heading for the water. The kids thought it was hilarious, but we all know that what he did saved our homes." Says Jones: "I just did what I thought needed to be done for my neighbors and my house, and I had the skill and equipment to do it." Jones' home suffered $30,000 in damage and has had to have its roof replaced. Parker says the bravery is typical of Jones, who after the storm called his brother in Florida to ask him to deliver ice, steaks and other supplies to the neighborhood. "During normal times, you could not ask for a better neighbor," she says. "But what he got out and did was beyond a good neighbor. We were all amazed and very, very thankful."