Research: Iron Isotopes Has Potential As A Tool In Oceanography; 'We Are Excited By Our Findings'

Navy Awards New Science Ship To Scripps Institution Of Oceanography; 'This Is A New Kind Of Research Vessel' 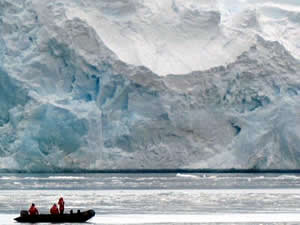 Scientists deployed from a research vessel get close to the ice in Antarctica. credit Rutgers University

ST. NEW BRUNSWICK, New Jersey -- Rutgers' Oscar Schofield and five colleagues from other institutions have published in Science, calling for expanded ocean-observing in the Antarctic, particularly in the Western Antarctic Peninsula, or WAP.

This mountainous arm of the continent stretches north toward South America.

The authors' case for a greatly expanded ocean-observing capability in the peninsula is stark. They observe that 87 percent of the peninsula's glaciers are in retreat, the ice season has shortened by 90 days, and perennial sea ice is no longer a feature of this environment. They also point out that these changes are accelerating.

Until recently, most oceanographic research in the Antarctic was done from government-funded ships. Ships are expensive, limited by harsh weather, and only useful during the Antarctic summer. Scientists also have been using satellite data for the past 30 years, but since the Antarctic is often cloud-covered, such data are often incomplete.

Schofield and his colleagues suggest a "nested, multi-platform" approach to Antarctic research. This strategy would employ ships, satellites, drifting sensors, submersible robots, and sensors mounted on animals such as seals and whales. The authors write that such a strategy should quantify a heat budget (the sum of incoming and outgoing heat) for the atmosphere and ocean, help scientists understand how the deep ocean is interacting with shelf waters, how this flux changes with time, and how this affects regional marine climate, ice dynamics and ecology.

The authors write that the ocean surrounding Antarctica is warming and that this warming has driven the deglaciation of the peninsula. They write that the interplay between ice, atmosphere and ocean in the in the peninsula produces a positive feedback â a situation in which a system responds to changes by amplifying subsequent changes. In the case of the Western Antarctic Peninsula, this means that ice, ocean and atmosphere work to increase each other's temperature and the rate at which their temperatures increase. However, the authors report that the mechanism of this interplay is not well understood, and expanded ocean-observing systems will help scientific understanding.