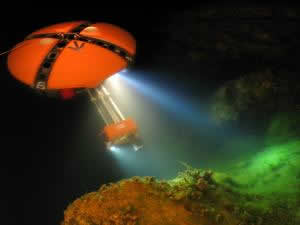 The DEPTHX project is creating the autonomy needed to enable an underwater robot to map three-dimensional spaces like flooded caverns and mines.

PITTSBURGH, Pennsylvania -- NASA-funded expedition, including researchers from Carnegie Mellon University's Robotics Institute, will begin searching for the submerged bottom of Mexico's El Zacaton sinkhole with a robotic submarine the week of May 14.

Zacaton, in the Mexican state of Tamaulipas, is a geothermal sinkhole, or cenote, that is more than 282 meters deep. Nobody has ever reached bottom and at least one diver has died attempting to do so. Scientists want to learn more about its physical dimensions, the geothermal vents that feed it and whatever life might exist at its various depths.

The Deep Phreatic Thermal Explorer (DEPTHX) mission will use a 2.5-meter-diameter submarine to map the cenote's shape, obtain water samples and return core samples from the cenote walls. In the process, DEPTHX will test technologies and methods that might be useful in other underwater missions, including the long-term possibility of exploring the oceans hidden under the icy crust of Europa, one of Jupiter's moons.

The mission's progress can be monitored at the Robotics Institute's DEPTHX Web site, www.frc.ri.cmu.edu/depthx, which will feature daily updates, images and graphics beginning May 15. A science writer from the University of Texas at Austin's Jackson School of Geosciences will maintain a daily blog of the mission at http://geology.com/.

Bill Stone of Stone Aerospace in Austin, Texas, will lead a team that includes scientists from the University of Texas at Austin, the Colorado School of Mines and the Southwest Research Institute. The team also includes Associate Research Professor David Wettergreen and colleagues from Carnegie Mellon's Robotics Institute, who helped develop the innovative DEPTHX sub.

"We'll spend the first two days checking out DEPTHX's sensors, updating its software and performing a test dive to 250 meters to check its pressure housings," Wettergreen said. "We'll then have six days to complete the science program. It's an ambitious program, but the vehicle performed well in two earlier field tests at the La Pilita cenote in Mexico."

DEPTHX is unique among autonomous underwater vehicles in its ability to navigate untethered in complicated, sometimes closely confined underwater spaces. Much of the cenote is pitch black so DEPTHX, using Carnegie Mellon software to control its flight, relies on depth, velocity and inertial guidance sensors to estimate its position in well-mapped areas, and an array of 56 sonar sensors to find its way in unmapped areas. Software developed by Robotics Institute graduate student Nathaniel Fairfield uses the sonar to build maps of the cenote. Project scientist George Kantor and senior research programmer Dominic Jonak complete the Carnegie Mellon team.

In addition to Zacaton, DEPTHX will be used to explore two nearby cenotes, Caracol and Verde, during the team's two-week expedition.