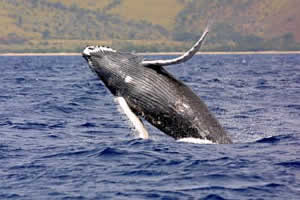 SILVER SPRING, Maryland -- Scientists have increased the estimate on the number of humpback whales in the North Pacific Ocean in a paper published in the journal Marine Mammal Science. The increase follows a refined statistical analysis of data compiled in 2008 from the largest whale survey ever undertaken to assess humpback whale populations throughout the North Pacific.

The number of North Pacific Humpback Whales in the 2008 study known as the Structure of Populations, Levels of Abundance and Status of Humpbacks, or SPLASH, was estimated at just under 20,000 based on a preliminary look at the data. This new research indicates the population to be over 21,000 and possibly even higher â a significant improvement to the scant 1400 humpback whales estimated in the North Pacific Ocean at the end of commercial whaling in 1966.

"These improved numbers are encouraging, especially after we have reduced most of the biases inherent in any statistical model," said Jay Barlow, NOAAs Fisheries Service marine mammal biologist at the Southwest Fisheries Science Center in La Jolla, Calif. "We feel the numbers may even be larger since there have been across-the-board increases in known population areas and unknown areas have probably seen the same increases."

The SPLASH research was a three-year project begun in 2004 involving NOAA scientists and hundreds of other researchers from the United States, Japan, Russia, Mexico, Canada, the Philippines, Costa Rica, Panama, Nicaragua and Guatemala and was the first systematic survey ever attempted to determine the humpback whales' overall population, structure, and genetic makeup in the North Pacific.

Researchers were able to quantify the number of humpback whales by photographing and cataloguing over 18,000 pictures of the animals' tail, or fluke because the pigmentation patterns on the fluke act like a fingerprint and are unique to each animal. Scientists determined population numbers by comparing photographs taken in northern feeding grounds (around the Pacific Rim from California to Kamchatka) compared with matches of the same animals in the warm tropical waters of southern breeding areas as far as 3000 miles away.

"This latest revision to the study provides an accurate estimate for humpback whales in an entire ocean that could not have been possible without researchers working together to pool data," said John Calambokidis, senior research biologist and co-founder of Cascadia Research. "While populations of some other whale species remain very low this shows that humpback whales are among those that have recovered strongly from whaling."