Research: No Faking, Crocodile Tears Are For Real; 'They Mean It' 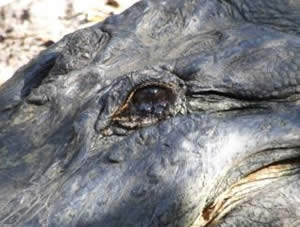 Alligators have been found to tear up when eating

When someone feigns sadness they "cry crocodile tears," a phrase that comes from an old myth that the animals cry while eating.

Now, a University of Florida researcher has concluded that crocodiles really do bawl while banqueting – but for physiological reasons rather than rascally reptilian remorse.

He found that five of the seven animals teared up as they tore into their food, with some of their eyes even frothing and bubbling.

"There are a lot of references in general literature to crocodiles feeding and crying, but it's almost entirely anecdotal," Vliet said. "And from the biological perspective there is quite a bit of confusion on the subject in the scientific literature, so we decided to take a closer look."

A paper about the research appears in the latest edition of the journal BioScience.

Vliet said he began the project after a call from D. Malcolm Shaner, a consultant in neurology at Kaiser Permanente, West Los Angeles, and an associate clinical professor of neurology at the University of California, Los Angeles.

Shaner, who co-authored the paper, was investigating a relatively rare syndrome associated with human facial palsy that causes sufferers to cry while eating. For a presentation he planned to give at a conference of clinical neurologists, he wanted to know if physicians' general term for the syndrome, crocodile tears, had any basis in biological fact.

Shaner and Vliet uncovered numerous references to crocodile tears in books published from hundreds of years ago to the present.

The term may have gained wide popularity as a result of a passage in one book, "The Voyage and Travel of Sir John Mandeville," first published in 1400 and read widely, they write.

Says the passage, "In that country be a general plenty of crocodiles …These serpents slay men and they eat them weeping."

Shaner and Vliet also found reference to crocodiles crying in scientific literature, but it was contradictory or confusing, to say the least.

One scientist, working early last century, decided to try to determine if the myth was true by rubbing onion and salt into crocodiles' eyes. Shaner said. When they didn't tear up, he wrongly concluded it was false. As Shaner said, "The problem with those experiments was that he did not examine them when they were eating. He just put onion and salt on their eyes."

As a result, Vliet decided to do his own observations.

In the myth, crocodiles often cry while eating humans. However, deadpanned Shaner, "we were not able to feed a person to the crocodiles."

Instead, Vliet had to settle for the dog biscuit-like alligator food that is the staple at the St. Augustine alligator farm. He decided to observe alligators and caimans, rather than crocodiles, because they are trained at the farm to feed on dry land. That's critical to seeing the tearing because in water the animals' eyes would be wet anyway.

The farm's keepers don't train the crocodiles to feed on land because they are so agile and aggressive, Vliet said. But he said he feels sure they would have the same reaction as alligators and caimans, because all are closely related crocodilians.

What causes the tears remains a bit of a mystery.

Vliet said he believes they may occur as a result of the animals hissing and huffing, a behavior that often accompanies feeding. Air forced through the sinuses may mix with tears in the crocodiles' lacrimal, or tear, glands emptying into the eye.

But one thing is sure: faux grief is not a factor. "In my experience," Vliet said, "when crocodiles take something into their mouth, they mean it."