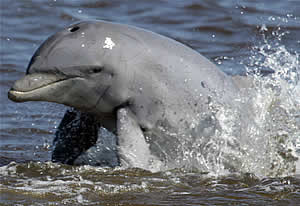 A panel of governmental, academic and non-profit scientists speaking today at the annual meeting of the American Association for the Advancement of Science (AAAS) unveiled research suggesting that diseases found in dolphins are similar to human diseases and can provide clues into how human health might be affected by exposure to contaminated coastal water or seafood.

“Dolphins and humans are both mammals, and their diet includes much of the same seafood that we consume. Unlike us, however, they are exposed to potential ocean health threats such as toxic algae or poor water quality 24 hours a day,” said Carolyn Sotka of the NOAA Oceans and Human Health Initiative and lead organizer of the session. “Our ecological and physiological similarities make dolphins an important ‘sentinel species’ to not only warn us of health risks, but also provide insight into how our health can benefit from new medical discoveries.”

“Marine animal and ecosystem health are connected to public health and well-being,” said Jane Lubchenco, Ph.D., under secretary of commerce for oceans and atmosphere and NOAA administrator. “NOAA is committed to better understanding these connections and building the partnerships necessary to have healthy oceans, including healthy dolphins.”

NOAA is the principal stewardship agency responsible for protecting dolphins in the wild and supports a network of national and international projects aimed at investigating health concerns. A few of these case studies highlighted today at AAAS illustrate how studying disease processes, or pathologies in dolphins, could lead to future prevention or treatment of some diseases in humans. Equally important is the knowledge gained with regards to overall population health, which can lead to improved management and science-based guidelines to mitigate disease outbreak in both people and animals.

Researchers from NOAA and its partner institutions recently discovered that bottlenose dolphins inhabiting estuaries along the Georgia coast have the highest levels of polychlorinated biphenyls (PCBs) ever reported in marine wildlife. The term PCB encompasses a suite of persistent contaminants that have been banned in the United States since the late 1970s due to documented adverse health effects. The extraordinarily high levels of PCBs measured in the dolphins, a maximum concentration of 2900 parts per million, may be suppressing their immune function.

The unique signature of the PCB compounds found in these dolphins is consistent with contaminants of concern at a Superfund site near Brunswick, Ga. Scientists are equally concerned about the high PCB levels in dolphins sampled near a marine protected area approximately 30 miles from Brunswick. This suggests that the contaminants are moving along the coast through the marine food web.

“When we received the lab results for the Georgia dolphins, we were alarmed by the contaminant levels and set out to investigate how these heavy chemical burdens were affecting their health,” states Lori Schwacke, Ph.D., with NOAA’s Center for Oceans and Human Health at the Hollings Marine Lab and co-lead investigator on the team.

A pilot study is being undertaken by the National Center for Environmental Health, Centers for Disease Control and Prevention (CDC), to examine potential environmental contaminants in residents of nearby coastal communities. The researchers are investigating whether coastal dolphin populations and human communities sharing the same seafood resources experience similar exposures.

Dolphins May Offer Clues to Treating Diabetes in Humans

Research conducted in part by the non-profit National Marine Mammal Foundation (NMMF) has uncovered evidence that bottlenose dolphins may be the first natural animal model for type II diabetes. Further study of their genome may elucidate a possible treatment for a disease that accounts for an estimated 5 percent of all human deaths globally, according to the World Health Organization.

These studies have found that healthy dolphins appear to readily turn on and off a diabetes-like state as needed. This “switch” mechanism is likely driven by the dolphins’ very high-protein and very low-carbohydrate fish diet. Analyses have revealed that a fasting mechanism in dolphins may trigger a series of changes in serum chemistries that matches those seen in humans with diabetes.

“While some people may eat a high protein diet to help control diabetes, dolphins appear to have developed a diabetes-like state to support a high protein diet,” according to Stephanie Venn-Watson, Ph.D., director of clinical research for NMMF. “Shared large brains that have high blood glucose demands may explain why two completely different species - humans and dolphins - have developed similar physiological mechanisms to handle sugar.”

Additional evidence collected from this study shows that humans and dolphins may share similar chronic disease outcomes associated with diabetes such as insulin resistance, hemochromatosis (iron overload) and kidney stones.

Model for Epilepsy Discovered from Marine Exposure to Toxic Algae

NOAA researchers found that for the first time exposing laboratory animals to a toxin produced by blooms of microscopic ocean algae can induce seizures and eventually lead to epilepsy in almost all of the animals tested. Establishing this novel linkage of oceans and health offers a new perspective to researchers and clinicians studying human epilepsy.

Working with the Marine Mammal Center in Sausalito, Calif., and other partners, scientists initially suspected a marine environmental cause of epilepsy by studying marine mammals and other wildlife with seizures that washed up on California beaches over the past decade.

The seizures were found to be caused by exposure to domoic acid, a neurotoxin produced by the Pseudo-nitzschia australis alga. After realizing thatsome sea lions were stranded with seizures when there were no harmful algal blooms, researchers started to believe that domoic acid poisoning may have progressed to chronic epileptic disease.

“Within six months of the initial exposure, 92 percent of laboratory rats tested developed epileptic disease that worsened over their lifetime,” said Ramsdell. “The domoic acid itself is not directly causing the epilepsy, but triggers a brief period of seizures that leads to changes in the brain, resulting in spontaneous and reoccurring seizures, the hallmark of epilepsy.”

The type of epilepsy in the rat model resembles human Temporal Lobe Epilepsy, as confirmed by at least one human case traced back to eating mussels contaminated with the domoic acid toxin.

This research could provide important insight into how dolphins and other species, including humans, respond to domoic acid poisoning. Stranded dolphins with high domoic acid levels do not survive long enough for treatment and study. It is possible that the acute initial poisoning may lead to sudden death; however, these new findings indicate those animals that survive an initial bout of seizures are likely to develop neurological disease with changes in behavior and increasing severity of spontaneous seizures. This new information can help guide future research and emergency response efforts during the next harmful algal bloom event.

A team of researchers and veterinarians from the Marine Animal Disease Lab at the University of Florida have discovered at least 50 new viruses in dolphins, the majority of which have yet to be reported in any other marine mammal species.

“We know that the ocean harbors a huge diversity of viruses; but we have very limited knowledge as to which viruses dolphins are susceptible to and how they develop the disease,” said Hendrik H. Nollens, Ph.D., research lead of the UF team. “By studying dolphin viral ecology, we learned more about how viruses infect human and land animals. This research could lead to preventing outbreaks of disease.”

One of these viruses, the human papillomavirus, was found to be common in bottlenose dolphins and likely represents the first natural model of papillomavirus outside the human species. Commonly known as HPV in humans, the virus has historically produced great health risks including cervical tumors or cancer in women, especially women with multiple types of the papillomavirus. This new study shows that while dolphins also host multiple types of papillomaviruses they don’t appear to get cancer, only genital warts. Further research into the genome of this virus in dolphins may help understand, manage and prevent cervical cancer in humans.

Thirteen additional RNA-based viruses that cause intestinal disease and encephalitis in humans have also recently been discovered in dolphins, whales and other marine life. Much like West Nile, Severe Acute Respiratory Syndrome (SARS) and influenza, RNA-based viruses have the ability to quickly adapt, rapidly mutate and jump from animals to people, posing potential threats to public health. Another virus identified in the dolphins had incorporated part of a similar human virus into its DNA make-up, making it a very probable candidate to infect humans.