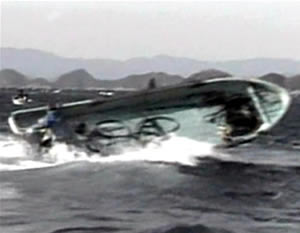 An angry whale upends and Japanese fisherman's boat. The fisherman did not survive.

UWAJIMA BAY, Japan -- An angry whale knocked a Japanese fisherman out of his small boat on Tuesday, and the whole thing was caught on tape.

The man had been trying to rescue the whale, which had strayed out of open waters.

The body of the fisherman was later discovered by divers. He was pronounced dead at a nearby hospital.

The whale started to thrash and threw two other fishermen from another boat into the water, as well.

The fishermen and officials were trying to coax the 50-foot-long whale out of Uwajima Bay and back into the open sea when the whale went wild.

It was not immediately clear why the whale had strayed into the bay.