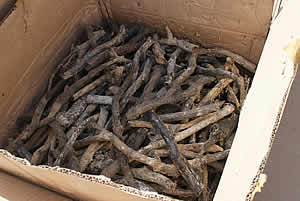 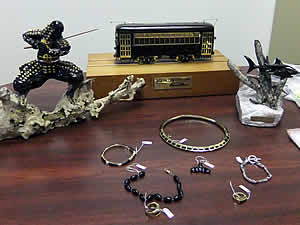 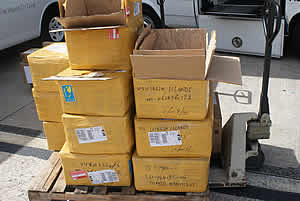 WASHINGTON, D.C. -- A U.S. Virgin Islands company was sentenced Wednesday in federal court in St. Thomas, U.S.V.I., for knowingly trading in falsely-labeled, protected black coral that was shipped into the United States in violation of the Endangered Species Act and the Lacey Act, the Department of Justice announced.

GEM was sentenced to pay a criminal fine of $1.8 million. The criminal fine will be apportioned between the Lacey Act Reward Fund and the National Oceanic and Atmospheric Administration (NOAA) Asset Forfeiture Fund, accounts established by Congress to assist U.S. Fish and Wildlife Service (FWS) and NOAA in the enforcement of federal conservation laws. GEM was sentenced to pay an additional $500,000 in community service payments for projects to study and protect black coral.

GEM was also ordered to forfeit dozens of jewelry items, ten artistic sculptures and over 13,655 pounds of raw black coral, the total value of which, at current prices, exceeds $2.17 million. The aggregate financial penalty of $4.47 million makes this the largest for the illegal trade in coral, the largest non-seafood wildlife trafficking financial penalty and the fourth largest for any U.S. case involving the illegal trade of wildlife.

"We face a growing challenge to preserve the world's coral, which serves as essential habitat for marine biodiversity," said Ignacia S. Moreno, Assistant Attorney General for the Environment and Natural Resources Division at the Department of Justice. "We will continue to work with our federal partners to aggressively investigate and prosecute those who violate U.S. law by illegally trading in protected species."

"I have stated before and reiterate that the U.S. Attorney's Office will vigorously protect the environment," said U.S. Attorney Ronald W. Sharpe for the District of the U.S. Virgin Islands. "It is critical that we do everything we can to prevent the decline and depletion of coral and other protected flora and fauna so that the environment, in this case the marine environment, may be preserved for our enjoyment and that of future generations."

"Black corals are valuable resources that serve as habitat for a myriad of species in the deep sea," said Eric Schwaab, assistant NOAA administrator for NOAA's Fisheries Service. "They are slow-growing, and some species can live for hundreds to thousands of years. Effective enforcement and regulation of their trade in support of CITES are among our most important tools in ensuring that collection of these species is sustainable and that their survival in the wild is assured."

"CBP Officers and Agriculture Specialists in the Caribbean work hand in hand with the U.S. Fish and Wildlife Service to detect and intercept falsely labeled and concealed wildlife from illegally entering into U.S. commerce," said Marcelino Borges, U.S. Customs & Border Protection (CBP) Director of Field Operations for the Caribbean. "Cooperation and collaboration between U.S. Customs & Border Protection and U.S. Fish & Wildlife Service were critical in the success of this investigation."

"This sentence sends a clear message to black coral traffickers that we and our federal law enforcement partners are in the business of preventing illegal wildlife trade," said Roberto Escobar Vargas, special agent in charge of U.S. Immigration and Customs Enforcement's Homeland Security Investigations (ICE-HSI) in Puerto Rico. "We will continue to identify and apprehend those who exploit protected species for commercial gain."

Black coral is a precious coral that can be polished to a high sheen, worked into artistic sculptures, and used in inlaid jewelry. Black coral is typically found in deep waters, and many species have long life spans and are slow-growing. Using deep sea submersibles, scientists have observed that fish and invertebrates tend to accumulate around the black coral colonies. Thus, black coral communities serve important habitat functions in the mesophotic and deepwater zones. In the last few decades, pressures from overharvesting, due in part to the wider availability of scuba gear, and the introduction of invasive species have threatened this group of coral. Recent seizures of illegal black coral around the world have led many to believe that black coral poaching is on the rise.

GEM is a manufacturer of high-end jewelry, art, and sculpture items that contain black coral. The vast majority of GEM's sales are through retail stores called "galleries." In order to facilitate its operations, GEM Manufacturing LLC operated through several subsidiaries that did business in Florida, Nevada, California, Hawaii, U.S. Virgin Islands, Alaska and the Cayman Islands.

Prior to 2010, GEM's primary supplier of black coral was a Taiwanese company, Peng Chia Enterprise Co., Ltd., located in Taipei, Taiwan. Peng Chia was, at times, able to obtain CITES export permits from the Taiwanese government, but by 2007, the Taiwanese government had increased scrutiny of the trade and insisted on a proper certificate of origin. Because much of the black coral was of, at best, undeterminable, if not legally questionable origin, it was basically impossible to arrange for a legitimate certificate of origin to be issued.

According to the plea documents, in order to be able to continue to supply GEM with raw black coral, Peng Chia sought other black coral sources in mainland China, routing them through Hong Kong on their way to GEM facilities. None of the shipments from Hong Kong had the required CITES certificates. Instead of being labeled "wildlife," each shipment was labeled "plastic of craft work" or something similarly deficient. The scheme had been running for at least two years by the time the year 2009 black coral shipments were sent to St. Thomas. The 2009 shipments form the basis of the charges contained in the bill of information.

A GEM company officer (terminated in early 2010) procured black coral from Peng Chia knowing that there were no CITES certificates. Under the supervision of this company officer, other GEM personnel confirmed that it was part of their jobs to receive and sort through incoming boxes of black coral and that none of those boxes arriving from Hong Kong contained CITES certificates. During the period 2007-2009, those same individuals reported seeing boxes containing black coral that were externally labeled as "plastic of craft work." GEM never ordered plastic and does not use plastic in any of its manufacturing.

In January 2009, GEM agreed to pay Peng Chia $38,965.00 for an order of black coral. After the funds were received in February 2009, Peng Chia used its Chinese supplier and Chinese intermediary to send six separate shipments of black coral to GEM in St. Thomas. Through a then company officer, GEM knew about the false labeling and lack of CITES certificates through emails with Peng Chia. On Aug. 19, 2009, Peng Chia sent a shipment comprised of 10 boxes of black coral that were labeled "plastic of craft work" to GEM. A CBP Contraband Enforcement Team flagged the shipment as suspicious and contacted FWS based in San Juan, Puerto Rico. As part of "Operation Black Gold," boxes from all six of the 2009 shipments were seized as evidence during a search of GEM's St. Thomas facility in September 2009. None of these six shipments was accompanied by CITES certificates. Boxes from the Aug. 19, 2009, May 10, 2009, and other shipments were falsely labeled as "plastic of craft work."

The case was investigated by agents of the FWS and NOAA with support from ICE-HSI and CBP. Analysis of coral samples by the FWS's National Forensics Laboratory in Ashland, Ore., was critical to the investigation. The case is being prosecuted by Christopher Hale of the Justice Department's Environmental Crimes Section, Environment and Natural Resources Division, and Nelson Jones of the U.S. Attorney's Office in St. Thomas.