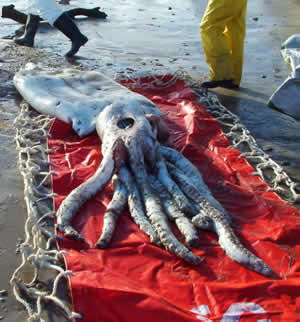 The giant squid was 3 foot at its widest point and 26 foot long. photo courtesy Tasmania Parks and Wildlife Service 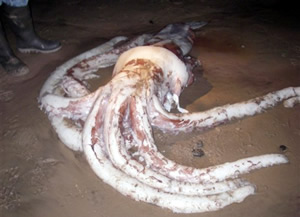 The giant squid was found washed up on a Tasmanian beach. photo courtesy Tasmania Parks and Wildlife Service 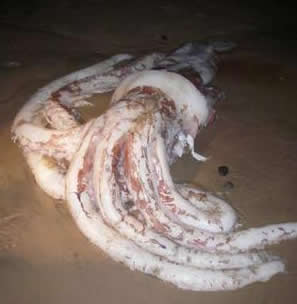 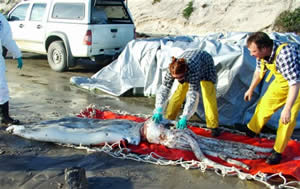 HOBART, Australia -- A giant squid washed up dead on Tasmania's west coast is one of the biggest ever found, weighing in at 250 kilograms (550 pounds), with a cross-section as big as a truck tire and longer than a station wagon.

Scientists, who see it as an exciting and intriguing discovery, will today take DNA and tissue samples from the sea monster before transporting it to Hobart for a post-mortem examination.

Tasmanian Museum curator David Pemberton said the eight-metre long (26 feet) Archotheuthis is one of the biggest ever discovered.

The museum's senior curator of invertebrate zoology, Genefor Walker-Smith, is heading a team of experts investigating the discovery at Ocean Beach, near Strahan.

"It is a whopper,'' Ms Walker-Smith said while en route to the scene today.

"The main mantle of the squid is about one metre across and its total length is about eight metres.

"It's a very exciting discovery and we will be carrying out a number of tissue tests and take pictures and measurements on the animal today.''

She said the squid was full of ammonia to aid buoyancy and would not recommend it as calamari. "It would not taste very nice at all,'' she said.

Mr Pemberton said it was the first time a giant squid had washed ashore on Tasmania's west coast.

"It is an intriguing and puzzling discovery,'' he said.

"Usually we find giant squid washed ashore on our east and south-east coast.''

Mr Pemberton, who has been tracking and studying the diets of giant squid around Tasmania for the past 10 years, said it was not surprising it was in the area.

"In mid-winter they congregate along the Continental Shelf, off Tasmania's west coast, and feed on Grenadier fish,'' he said.

"The Sperm whales then feed on all of them while migrating north from the Southern Ocean.'' He said the cephalopod was in very good condition, and had been dead for possibly less than a day.

"The hood (mantle) has separated from the body which is not unexpected.''

He said the entire specimen may be preserved to gather information on its biology and that it could be publicly displayed at the museum.

A member of the public made the discovery last night.