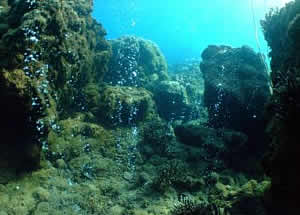 A new study from University of Miami (UM) Rosenstiel School of Marine & Atmospheric Science scientists Chris Langdon, Remy Okazaki and Nancy Muehllehner and colleagues from the Australian Institute of Marine Science and the Max-Planck Institute for Marine Microbiology in Germany concludes that ocean acidification, along with increased ocean temperatures, will likely severely reduce the diversity and resilience of coral reef ecosystems within this century.

The research team studied three natural volcanic CO2 seeps in Papua New Guinea to better understand how ocean acidification will impact coral reefs ecosystem diversity. The study details the effects of long-term exposure to high levels of carbon dioxide and low pH on Indo-Pacific coral reefs, a condition that is projected to occur by the end of the century as increased man-made CO2 emissions alter the current pH level of seawater, turning the oceans acidic.

"These 'champagne reefs' are natural analogs of how coral reefs may look in 100 years if ocean acidification conditions continue to get worse," said Langdon, UM Rosenstiel School professor and co-principal investigator of the study.

The study shows shifts in the composition of coral species and reductions in biodiversity and recruitment on the reef as pH declined from 8.1 to 7.8. The team also reports that reef development would cease at a pH below 7.7. The IPCC 4th Assessment Report estimates that by the end of the century, ocean pH will decline from the current level of 8.1 to 7.8, due to rising atmospheric CO2 concentrations.

"The seeps are probably the closest we can come to simulating the effect of man-made CO2 emissions on a coral reef," said Langdon. "They allow us to see the end result of the complex interactions between species under acidic ocean conditions."

The reefs detailed in this study have healthy reefs nearby to supply larvae to replenish the reefs. If pH was low throughout the region -- as projected for year 2100 -- then there would not be any healthy reefs to reseed damaged ones, according to Langdon.

The study titled "Losers and winners in coral reefs acclimatized to elevated carbon dioxide concentrations," was published in the June issue of the journal Nature Climate Change. The paper's co-authors include Katharina Fabricius Sven Uthicke, Craig Humphrey, Sam Noonan, Glenn De'ath and Janice Lough from the Australian Institute of Marine Science and Martin Glas from Max-Planck Institute for Marine Microbiology. The research was funded by the Australian Institute of Marine Science, the University of Miami, and the Max-Planck Institute of Marine Microbiology through the Bioacid Project (03F0608C).