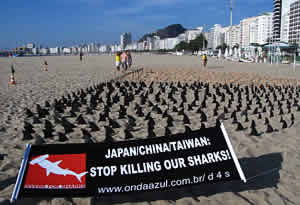 Promoted by Divers for Sharks, a coalition of diving industry and recreational divers in 128 countries and based in Brazil, the protest is the first in a series of demonstrations and awareness activities scheduled to coincide with the meeting of ICCAT, the International Commission for the Conservation of Atlantic Tuna. Environmentalists and the diving industry have accused ICCAT of being deaf to their requests for stricter regulations to prevent catching sharks in tuna long-lines and the practice of 'shark finning', where fins are removed from sharks and the body dumped overboard. Recently, fins from an estimated 280,000 sharks were confiscated by Brazilian authorities from a contraband shipment bound to China from the Northern State of ParÃ¡.

"Politicians and bureaucrats as those irresponsible ICCAT officers only listen to the fishing industry lobby, but there are thousands of jobs and millions of dollars generated by the non-consumptive diving industry that benefit coastal communities in developing countries that have to be taken into account. Sharks are a major diving attraction and are are fast disappearing from diving sites, endangering jobs for people who protect the marine environment while ICCAT and other international fora only protect the interests of the industrial fishing corporations", said Paulo Guilherme Alves Cavalcanti, a Brazilian dive operator and co-founder of Divers for Sharks.

Sharks have become globally threatened by finning to supply Asian markets where affluent people pay astonishing prices for shark fin soup, a tasteless dish associated with wealth in some cultures. With many countries now taking measures to protect sharks in their waters, Brazil, with unregulated and barely enforced fisheries and border controls, has become a major target for the shark fin contraband mafias, and also supplies shark fins legally for export by the thousands.

Brazilian marine conservation activist and writer JosÃ© Truda Palazzo, Jr., who co-founded Divers for Sharks with Paulo Cavalcanti, said that "it is shameful that ICCAT is presiding over the demise of the Atlantic sharks and that other regional fisheries agreements are doing the same the world over. Industrial fishing has become a criminal mining industry, and itÂ´s time the people to learn about it and stop its abuses before itÂ´s too late."

ICCAT is meeting in France from the 17 to 27 of November, and is expected to give little attention to the plight of threatened or endangered species caught in the oceanic fisheries it manages.

Divers for Sharks has pledged to raise public awareness about the plight of sharks and their importance to the diving industry health worldwide. The protest in Rio should be a major eye-opener for lawmakers to watch the poor performance of international fisheries agreements and to take urgent action to save sharks and other marine species from extinction.

For more information please visit Divers for Sharks on Facebook.