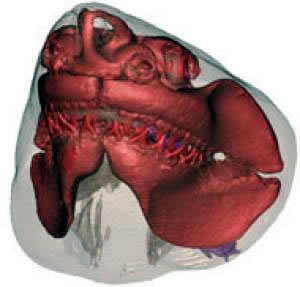 CRONULLA, Australia -- Scientists are building a three dimensional computer model to test the ‘bite force’ of the Great White shark using data from a shark caught in beach nets off the NSW Central Coast.

The 2.4 metre long Great White shark was stored at the NSW Department of Primary Industries’ Cronulla Fisheries Research Centre of Excellence until researchers were ready to analyse its jaw and facial muscles.

This week Dr Wroe and his team are dissecting the five year old shark and measuring the structure of its jaw and the muscles used in biting.

Underwater experiments with live sharks fail to adequately indicate the force of the Great White’s bite, and the sharks have been known to bite through materials that require much greater force than that so far observed in situ.

"The test bite has much less force", he said.

The approach being taken in this project involves determining the maximum forces that Great Whites can exert using advanced mathematical and computing methods that were originally developed for the calculation of stresses in structures such as bridges.

The collaborating investigator in the project for NSW DPI, Dr Michael Lowry, said one of the project aims is to identify the shark species responsible for damage to submarine cables and towed arrays.

"Measurement of bite forces will help in testing and developing materials suitable for cabling and sensory equipment used in the marine environment."

US shark biologist Dan Huber is working with the Australian team to learn whether sharks such as the Great White are responsible for damaging submarine cables and communication systems on US Navy submarines.

Dr Huber’s team has experimented with protective materials including Kevlar fibres as a means of protecting cables and arrays from attacks from marine life. See http://luna.cas.usf.edu/~motta/fishbite.html

Dr Wroe, from the University of NSW, is an expert on carnivore evolution who has helped pioneer new techniques that reveal the feeding habits of flesh-e