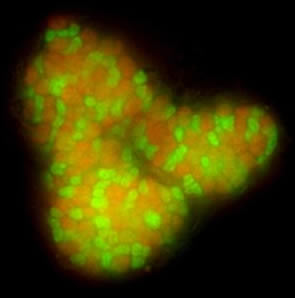 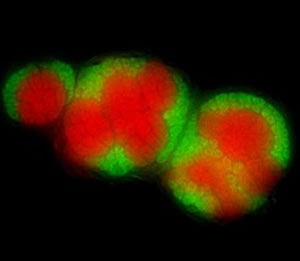 PASADENA, California -- Scientists of the Helmholtz Centre for Environmental Research (UFZ) in Leipzig and the California Institute of Technology (Caltech) in Pasadena succeeded in capturing syntrophic (means "feeding together") microorganisms that are known to dramatically reduce the oceanic emission of methane into the atmosphere. These microorganisms that oxidize methane anaerobically are an important component of the global carbon cycle and a major sink for methane on Earth.

Methane -- a more than 20 times stronger greenhouse gas than carbon dioxide -- constantly seeps out large methane hydrate reservoirs in the ocean floors, but 80 percent of it are immediately consumed by these microorganisms. The importance of the anaerobic oxidation of methane for the Earth's climate is known since 1999 and various international research groups work on isolating the responsible microorganisms, so far with little success.

Pernthaler and co-workers developed a new molecular technique to selectively separate these microorganisms from their natural complex community, and subsequently sequenced their genome. The findings were exciting: Besides identifying all genes responsible for the anaerobic oxidation of methane, new bacterial partners of this syntrophic association were discovered and the ability to fix N2 could be demonstrated.

The work has been published in the current issue of the renowned Journal Proceedings of the National Academy of Sciences (PNAS).

The beauty of small things revealed

Microorganisms are the unseen majority on our planet: There are more than 100 million times more microbial cells than stars in the visible universe, accounting for more than 90 percent of the Earth's biomass. Yet, we have little idea what most of these bacteria and archaea are doing. It is not only their small size that makes them hard to study. Most microorganisms cannot be grown, and thus studied, in the lab.

But recent developments of new molecular techniques allow the study of microorganisms where they live: in nature. This is leading to an explosion of knowledge with no end in sight. One of these techniques is genome sequencing - learning about the genetic make-up of an organism. This works well for single organisms, such as the sequencing of the human genome.

The complexity of natural microbial communities, however, is a major problem. The vast collection of genes can often not be linked to an organism or a physiological process. This plenitude of general information can be compared to a one-billion pieces puzzle of which you own only 300 pieces and you have to try to find out where which piece belongs and how the whole picture could look like.

Scientist at UFZ and Caltech now developed a method that solves this problem. Pernthaler and co-workers attached small ironbeads to the microorganisms of interest and pulled them out of the deep sea sediment by simply applying a magnet.

These microbes are Archaea, which cooperate with sulfate reducing Bacteria to perform a thermodynamically tricky process: the anaerobic oxidation of methane (AOM).

These poorly understood consortia are globally distributed in oceanic sediments above methane hydrates and provide a significant sink for methane by substantially reducing the export of this potent greenhouse gas into the atmosphere.

After sequencing the genomes of the purified syntrophic consortia, Pernthaler and co-workers could find all genes responsible for AOM.

The scientist also discovered an unexpected diversity in the bacterial partners of this syntrophic association, which may play a role in the performance of AOM. Pernthaler and co-workers also found genes for N2 fixation and demonstrated in lab experiments that the AOM archaea are indeed fixing N2.

These results are intriguing, especially since the fixation of N2 is energetically expensive processes and the energy gained by AOM is low. The potential for metabolic versatility combined with the ability to form partnerships with other microorganisms, might be the secret to the successful distribution of this biogeochemically significant group of microorganisms.