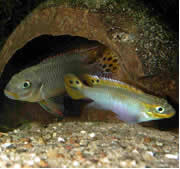 Mom and dad may also be brother and sister.

BONN, Germany -- Although breeding between close kin is thought to be generally unfavorable from an evolutionary standpoint, in part because harmful mutations are more easily propagated through populations in this way, theory predicts that under some circumstances, the benefits of inbreeding may outweigh the costs.

Researchers have now reported real-life evidence in support of this theory. Studying an African chiclid fish species, Pelvicachromis taetiatus, in which both parents participate in brood care, the researchers found that individuals preferred mating with unfamiliar close kin rather than non-kin.

Because parental work is energetically costly, and kinship generally favors cooperation, one possible explanation for kin preference in breeding in this species is that it offers a benefit by facilitating parental cooperation.

And indeed, observations of behavior exhibited by this chiclid species showed that related parents were more cooperative and invested more resources in parenting than did non-related parents. Together, the findings suggest that, somewhat unusually, active inbreeding is advantageous in this fish species.

The findings, reported by Timo ThÃ¼nken and colleagues of the University of Bonn, appear in the February 6th issue of Current Biology.