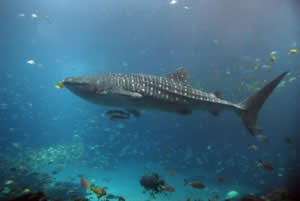 The Georgia Aquarium believes that the decline in the health of both Norton and Ralph, the whale shark that died in January 2007, is related to their inappetance. During the necropsy of Ralph, findings showed that he had an atypical stomach, which was thin-walled and perforated; Norton’s stomach appeared normal. Studies will continue to see if there is a link between their inappetance and a series of treatments used in 2006 to manage parasites in the Ocean Voyager exhibit, or if there is another cause. The treatment is commonly used in both home and professional aquariums and was used in a conservative manner. As a precaution, the Aquarium stopped using this treatment after the loss of appetite was observed.

Alice, Trixie, Taroko and Yushan, the Aquarium’s other whale sharks, did not experience this same course of treatment, and they are all eating their complete diet and exhibiting normal behavior.

Jeff Swanagan, President and Executive Director of the Georgia Aquarium said, "While we may never know the exact cause of the decline in Norton’s health, the scientific learning that will come from animals being here, and most important, being appreciated by the millions of people who have had a chance to observe them, will be an important contribution to future generations. Everything we learn is a new discovery, and we are sharing this information with shark researchers and scientists around the world.”

The samples taken from the necropsy are currently being studied by scientists across the country. The process of analyzing the data takes many months. Samples from the necropsy have been stored at temperatures of -80 degrees Fahrenheit, so that they may be evaluated with future technology and shared with other institutions to advance the understanding of whale sharks.

In Ralph’s necropsy, scientists discovered that whale sharks have a different mechanism to control eye movement and a much more complex way of filtering water to catch food than previously believed. Additional tests were conducted during Norton’s necropsy so there will be a better understanding of these systems. These discoveries and others will be studied in further detail and submitted to scientific journals.

“No one has ever done many of the things that our team does every day at the Georgia Aquarium. And the mail that we receive, the emails that are sent to us and the comments our staff has heard from more than five million adults and children who have walked through our doors, tell us there are incomparable education and research rewards that come from the Georgia Aquarium," Swanagan said.