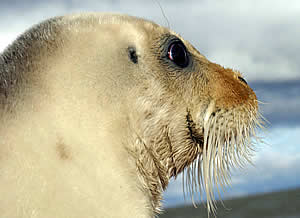 SILVER SPRING, Maryland -- NOAA's Fisheries Service is proposing to list four subspecies of ringed seals, found in the Arctic Basin and the North Atlantic, and two distinct population segments of bearded seals in the Pacific Ocean, as threatened under the Endangered Species Act.

Ringed seals are found in the Arctic Basin (including the Bering Sea), western North Pacific (Sea of Okhotsk and Sea of Japan), and in the North Atlantic in the Baltic Sea and Lakes Ladoga and Saimaa east of the Baltic Sea.

Throughout most of its range, the Arctic ringed seal does not come ashore and uses sea ice for whelping, nursing, molting, and resting. Ringed seal pups are normally born in snow caves in the spring, and are vulnerable to freezing and predation without them. Timing of spring ice break-up, snow depths on sea ice, and late-winter rain can adversely affect snow cave formation and occupation. That the species produces only a single pup each year may limit the ringed seal's ability to respond to environmental challenges such as the diminishing ice and snow cover.

Because of these factors, NOAA's Fisheries Service has found that these four sub-species of ringed seal are at risk of becoming endangered within the foreseeable future throughout all or a significant portion of their ranges, warranting a listing as threatened.

The bearded seal has two subspecies, one in the Pacific Ocean and the other in the Atlantic Ocean. Within the Pacific subspecies, there are two distinct population segments (DPS): the Okhotsk DPS, found in the Sea of Okhotsk; and the Beringia DPS, found in the Bering, east Siberian, Chukchi, and Beaufort seas. NOAA's Fisheries Service is proposing to list both Pacific DPSs of bearded seal as threatened.

Both Pacific bearded seal DPSs are closely associated with sea ice, particularly during the reproduction and molting stages. They primarily feed on shallow-water organisms, making their range generally areas where seasonal sea ice occurs over relatively shallow waters. Forecasts predict that this ice will be substantially reduced within this century, particularly in the Sea of Okhotsk, and there is potential for the spring and summer ice edge to retreat to deep waters of the Arctic Ocean basin.

Because of these factors, NOAA's Fisheries Service has found that the two DPSs within the Pacific subpopulation of bearded seals are at risk of becoming endangered species within the foreseeable future throughout all or a significant portion of their ranges, warranting a listing as threatened.

NOAA's Fisheries Service previously determined listing was not needed for another ice seal, the ribbon seal, which is less dependent on sea ice than bearded and ringed seals.

NOAA's Fisheries Service is seeking comments from the public on the proposed listing of ringed and bearded ice seals for 60 days from date of publication in the Federal Register, which should occur the middle of next week. The proposed rules, maps, status review reports and other materials relating to this proposal can be found on the Alaska Region website at: http://alaskafisheries.noaa.gov.