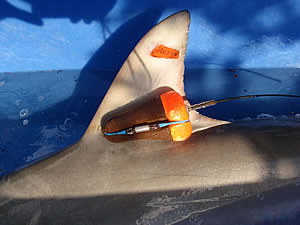 Accelerometers attach to a shark's dorsal fin and detect each flick of its tail or tilt of its body, giving scientists insight into what sharks are doing and when. They focus on much smaller movements than commonly-used satellite tags, which track a shark's general geographic location and sometimes its depth.

Mote scientists have been the first to deploy accelerometers on multiple shark species and have even used them to study the movements of Burmese pythons. The current project will be the first study to use accelerometers to investigate how catch-and-release fishing affects sharks.

Project collaborators will include professional charter captains and researchers from the Florida Aquarium Center for Conservation, the Massachusetts Division of Marine Fisheries and NOAA's National Marine Fisheries Service.

Catch-and-release fishing allows sharks to continue their valuable role as predators in marine ecosystems, while helping to maintain Florida's recreational saltwater fishing industry, which has an overall annual estimated economic impact of $5.4 billion.

Not all sharks survive release, and the survivors might bear the lingering effects of stress related to capture. Previous studies have shown that caught-and-released sharks had stress-related changes in blood chemistry, but scientists have rarely been able to relate these changes to death or impaired behavior. Studies that tracked sharks after release have only recorded their broader-scale movements.

"For the first time, we'll take a magnifying glass to sharks' behavior after release â for instance, we'll look at how strongly they're swimming after capture and whether they're rolling or listing," said project leader Dr. Nick Whitney, a staff scientist in Mote's Center for Shark Research. "These measurements go way beyond 'dead or alive.' The vast majority of sharks may survive, but it's important to know if their recovery time varies with different kinds of fishing gear. Our technique will yield new, hard data comparing standard J-hooks with circle hooks, which are designed to be safer for sharks."

The one-year study will begin in September in Charlotte Harbor and will later expand to Florida's east coast. Scientists will work with participating charter captains to catch sharks on rod and reel using both circle- and J-hooks.

Scientists will collect a blood sample from each shark caught and attach an accelerometer to its dorsal fin. They will then compare the accelerometer results to stress-related chemicals in the sharks' blood. By relating blood test results to the behavior of the sharks, they hope to later draw conclusions about the fate of other sharks using blood samples alone.

"The goal will be for the charter captains to use the same practices and gear that Florida anglers normally would, so we can compare the two hooks in a real-world setting and look at how they perform in relation to shark survival and behavior," Whitney said.

Circle hooks are designed to hook a fish's jaw and prevent the animal from swallowing it and causing internal injuries. The hooks are also designed to be easier to remove, allowing a fish to be released more quickly. But the effectiveness of these hooks has not been tested widely in sharks.

The team will focus on blacktip sharks, a coastal species targeted by commercial fisheries and Florida's recreational anglers. "We hope to establish study techniques that can be applied to other species," Whitney said. "By combining accelerometers with more conventional techniques, we hope to revolutionize the study of catch-and-release effects."