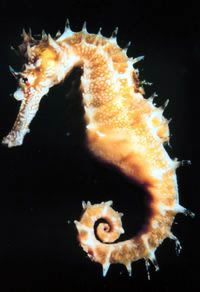 Aphrodisiac? Indian scients are out to find out once and for all. source: NOAA

Indian scientists are hoping to discover once and for all if seahorses are an aphrodisiac, a myth that has made the creatures a major hunting target for centuries and an endangered species.

Seahorses have been eaten for more than 2,000 years and, as well as being a traditional way of improving sex-drive, are also thought to help respiratory problems.

Now, the National Institute of Oceanography (NIO) in seaside Goa state is teaming up with the National Center for Cell Sciences (NCCS) to try to unravel the mysteries of the unusual fish.

Raidurga Sreepada, a leading scientist at the NIO, said that confirming the properties of one of world's most complex living creatures will not only help the pharmaceutical sector but also help stamp out rampant poaching.

Scientists say that once they establish seahorses' properties, fishing communities and even poachers will be encouraged to set up hatcheries instead of taking them from the wild.

"They are being hunted since 342 BC and it is now the hottest recipe for traditional medicines of China, Korea, and Thailand as an aphrodisiac, a drug against bronchial asthma, and whooping cough," Sreepada said.

"We will take from the wild, culture them for their properties, and if we find medical efficacy then we will immediately offer our experiments to people and they can set up standardized commercial hatcheries."

The NIO is looking for five million rupees ($111,000) in federal aid for the research in seahorses, put on an endangered species list by India in 2001.

The organizations believe that they will get the cash from New Delhi and the three-year research project will commence in February.

"Seahorses are extremely complex creatures and it is difficult to synthesize them in laboratory conditions but chemistry will help us to gain a lead and then we will make an attempt to learn their secrets," said P.S. Parmeshwaran, NIO scientist for chemistry.

"It's exciting to dig into this mystery, which has kept mankind mesmerized throughout our history," he said, referring to the aphrodisiacal qualities of the fish.

The NIO estimates that 20 million seahorses are traded across the world each year.

"India is one of its largest clandestine exporters, shipping 3.6 tons or 1.3 million seahorses annually," the NIO told the national government in October.

One kilogram (2.2 pounds) or 100 dried seahorses fetch up to $200 in countries such as the United States, which have large Chinese populations, it said.

"Demand appears to be greater than supply. The trade is rapidly growing and the populations of seahorses are being over-exploited with many places approaching the danger of extinction," it said in a classified document.

Parmeshwaran said that both China and Australia had done similar research, but the results had not been made public.

"We intend to [make the findings public], as either way, we will help the seahorse population," Sreepada added.

Sreepada launched a probe in 2002 into the hyper-sexual marine species whose male conceives and gives birth to up to 200 babies after a two-month gestation period.

NCCS zoologist R.R. Bhonde said that he was planning a different approach to discover the potency of seahorses who, despite being poor swimmers, can drift huge distances.

"It is a fish and we plan to make a cell-line from the developing embryos, which will help us to synthesize it," Bhonde said by telephone from NCCS headquarters in Pune. "It will open doors to uncharted science and show us the way into the evolution of nature," the zoologist said.