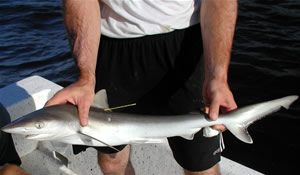 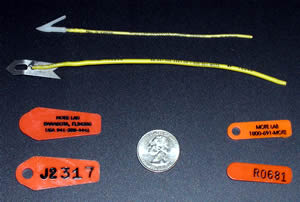 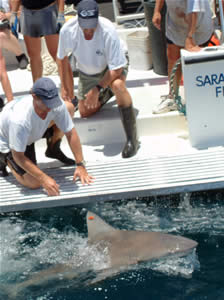 SARASOTA, Florida -- A shark tagged by Mote Marine Laboratory scientists off Pensacola , Fla., spent nearly 11 years at liberty before being caught last May by a fisherman who returned the tag to Mote. The tag return marks the longest period of time between tagging and recapture in the 17-year history of Mote's shark-tagging program.

The male Atlantic sharpnose shark was tagged by Mote scientists while aboard a National Marine Fisheries Service research cruise in the northern Gulf of Mexico in 1996. The shark was caught again 11 years later by charter boat Capt. Kenny Bellais off Ship Island Miss., about 103 nautical miles from the area where it was originally tagged.

Atlantic sharpnose sharks are a small, relatively abundant species of coastal shark that are often prey for larger shark species. As the larger species have been depleted by overfishing in Gulf waters, small species like the sharpnose have held their own.

This tag return ‑ and others like it ‑ help scientists in Mote's Congressionally designated Center for Shark Research track the growth, seasonality and migration of sharks along the Gulf coast and the Florida Keys to better understand the status of wild shark populations and how they might be affected by human influences. Mote has tagged more than 16,000 sharks of 16 species in U.S. waters since 1991.

"Some shark species move relatively short distances, while others travel thousands of miles and, in many species, the older a shark is, the greater the distance it will have traveled," said Dr. Robert Hueter, director of Mote's Center for Shark Research. "Tag returns are a snapshot showing where a shark was tagged at point A and recaptured at point B. It really helps our understanding of sharks when we get reports from a wide variety of areas â when fishermen from all over the state watch for and return or report our tags."

In the case of the sharpnose tag returned after 3,925 days, the information also helps scientists understand how well their animal-tracking methods are working. "This shark demonstrates that tags can stay on for many years, which is important for this type of research," Hueter said.

Results from Mote's tagging efforts come in-part from recreational anglers and commercial fishermen who return the tags from the sharks they capture to Mote scientists. Those who return tags are then eligible for a cash prize drawing. In 2007, 25 tag returns were eligible for the shark center's prize drawing. Three winners each received $100 in cash. The winners were:

Short-distance tag returns over long time periods don't necessarily mean that sharks hung around the same place the whole time. Instead, many of the animals may migrate long distances and then return to specific home areas located within their ranges. To fill in the details, Mote scientists use more sophisticated â and expensive â electronic tags to track sharks' movements between tagging and recapture.

Fishermen throughout the Gulf of Mexico can help scientists in their studies â and earn the chance to win a cash prize â by keeping an eye out for yellow or orange plastic tags attached near a shark's first dorsal fin. The tags can sometimes be overlooked because of marine algae growing on the surface of the tag. Fishermen are asked to cut off the tag if possible and send it to Mote. Alternatively, they may simply write down the tag number and mail or phone in that information as soon as possible. Scientists ask that the fishermen also send their names, addresses and phone numbers, date and location of capture along with the total length and weight of the shark (or an estimate) and whether it was kept or released.

Anglers should send the tag and information about its capture to the Center for Shark Research, Mote Marine Laboratory, 1600 Ken Thompson Parkway , Sarasota , FL 34236 . Anglers can call 800-691-MOTE (800-691-6683) to make a report. Fishermen who return the tag information to Mote have their names entered into a yearly drawing for the chance to win a cash prize.