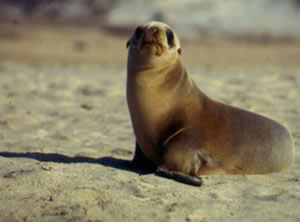 WASHINGTON, D.C. -- Scientists, reporting in the current issue of the online journal Marine Drugs, state that an increase of epileptic seizures and behavioral abnormalities in California sea lions can result from low-dose exposure to domoic acid as a fetus. The findings follow an analysis earlier this year led by Frances Gulland of the California Marine Mammal Center that showed this brain disturbance to be a newly recognized chronic disease.

John Ramsdell of NOAA's Center for Environmental Health and Biomolecular Research in Charleston, SC, in partnership with Tanja Zabka, a veterinary pathologist at the Marine Mammal Center, conducted the first-of-its kind analysis of poisoning by the algal toxin, domoic acid, during fetal brain development. The results, analyzed across multiple animal species, point to the toxin as a cause for behavioral changes and epilepsy that does not become evident until later in life.

Domoic acid is produced by harmful algal blooms. The algae is consumed by fish such as sardines, herring and anchovies, a significant part of the sea lion diet. Exposure during pregnancy concentrates the domoic acid toxin in the mother's amniotic fluid, which normally protects and aids in the growth of a fetus. In sea lions exposed to domoic acid, the fluid retains the toxin, thus subjecting the fetus to repeated direct absorption through immature skin cells and swallowing during gestation.

The results, demonstrated experimentally in laboratory animals and projected to occur in fetal sea lions, is abnormal development of brain neurons which does not impact the animal until it enters later life stages. This phenomenon, known as "fetal basis to adult disease," is expressed through seizures and abnormal behavioral changes.

"This represents a significant break through in understanding the origins of this behavior and will help us better understand the long-term consequences of exposure to harmful algal blooms during pregnancy," notes Ramsdell.

Algal blooms have been increasing in the sea lions' habitat, resulting in more cases of acute poisoning and increased concern over the long-term effects of algal toxins.

Scientists in NOAA's Oceans and Human Health Initiative are studying the impact of harmful algal blooms on marine mammals to determine if similar impacts could affect humans exposed to the similar harmful toxins.