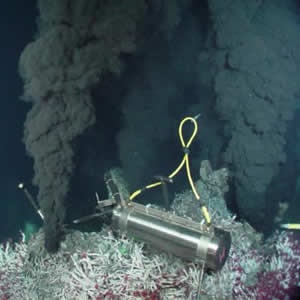 SEATTLE, Washington -- So you're a fish.

Right now some tubeworm tartare and clams on the half shell would really hit the spot, so you're headed for the all-night cafÃ©. "All-night" being the operative word because the volcanic ridge you're tooling along is nearly 1.5 miles below the surface. The term "where the sun don't shine" perfectly describes the place. It's pitch black. Darn, but what's that loud rumbling up ahead? Must be one of those pesky black smokers. Some of those babies can fry your face off. A detour is highly indicated.

The long-held assumption that black smokers are silent is wrong, according to recently published research led by Timothy Crone, a University of Washington doctoral student in oceanography. It's prompting scientists to wonder: Could the sound and vibrations of black smokers be the reason fish in total darkness avoid being poached by waters as hot as 750 F? And might similar sounds guide them to the smorgasbord of tube worms, mussels, shrimp, snails and other fauna at vents with more temperate waters?

Want to be the first on your block to hear what a black smoker sounds like? Go to http://uwnews.org/article.asp?articleID=30030 where audio of a black smoker has been combined with a video into a short movie.

The research was reported online during the inaugural month of the Public Library of Sciences' interactive journal, PLoS ONE. Aimed at involving more people in science, published results are available without a subscription and can include a wealth of audio, video and other materials.

Hydrothermal vents, discovered in the 1970s, are found along volcanically active ridges where seawater seeps into the seafloor, picks up heat and minerals and then vents back into the ocean depths. The hottest and most vigorous of the vents are black smokers, so called because when the fluids they emit hit the icy cold seawater, minerals in the fluids precipitate out and it looks just like dark, billowing smoke.

Because of a paper published 15 years ago, it had been thought the vents were probably playing only the sounds of silence. Still a number of scientists suspected that the vents could be generating sounds, given the obvious turbulence of the flows, Crone says.

It was decided that new recordings should be attempted because Crone and other oceanographers are looking for new ways to measure vent flows, which are a source of heat and minerals in the world's oceans that scientists would like to understand better. Commonly used instruments to measure flow are often short lived when inserted in the superheated, corrosive black-smoker fluids.

How much simpler if the vents were generating some kind of sound that could be recorded and correlated to flows, Crone says.

With funding from two organizations that help take fields of research and instrumentation in new directions, the UW Royalty Research Fund and the W.M. Keck Foundation, a deep-sea digital acoustic recording system was deployed in the Main Endeavour vent field. The field is on the seafloor about 300 miles west of Seattle on the Juan de Fuca Ridge. Crone recorded 45 hours of sound at the vent scientists call "Sully" and 136 hours at the vent called "Puffer."

That's the sound of Sully you're hearing as the video runs. Crone likens the sound to the rumbling of an avalanche or a forest fire.

How loud would it be if you were sitting a foot away? (That's something you couldn't actually do because the pressure where most black smokers are found is so intense that you'd implode.) The sound level would be somewhere between conversational speech and a hairdryer, Crone says.

Four possible mechanisms might be causing -- or contributing to -- the noise, the researchers say. For example, the flow could be pulsating or its volume could be changing as its waters cool. Dissimilar fluids in the flow could generate noise where they mix. Or the fluids rushing through the nooks and crannies of the smoker vent itself could be creating noise.

The sounds also appear to change as flows change in reaction to such things as the Earth's tides, the authors say. Read the full report on PLoS ONE at http://dx.doi.org/10.1371/journal.pone.0000133. professor at Lamont-Doherty Earth Observatory, Columbia University; and Jeffrey Parsons, formerly a UW faculty member, now with Herrera Environmental Consultants.

Buried within the broad range of sounds that produce the rumbling, Crone's analysis revealed the surprise that the vents also produce resonant tones. There could be a number of things generating such tones. For example, flows along the cavities and bumps inside the vent structures may cause tones in the same way jug band members produce sound by blowing across the mouths of their jugs, causing the air inside the jug to resonate and produce a deep tone.

Both Sully and Puffer produce resonant tones at several different frequencies that we can't discern with all the other noise generated by the vents. But you can hear examples of tones that Crone pulled out from the racket by listening at http://uwnews.org/article.asp?articleID=30030.

"With these resonant tones, each vent within the vent field is likely to have its own unique acoustic signature," Crone says.

If so, and if fish are actually using vent sounds to navigate, then the distinctive tones might be how fish find their way back to cooler vents where the eats have been particularly good.

In that case, being on top of old smoky -- all covered in sounds -- would be a good thing indeed.