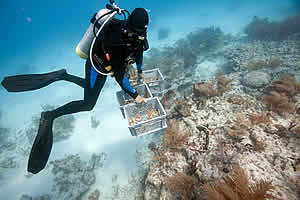 BIG PINE KEY, Florida -- Scientists are transplanting up to 10,000 nursery-grown staghorn and elkhorn corals to degraded reefs in Florida and the U.S. Virgin Islands in the largest marine restoration project of its kind. Experts hope that the transplanted young corals will thrive and reproduce, helping to recover populations of these two threatened species.

NOAA-funded scientists with The Nature Conservancy and partner organizations began growing staghorn and elkhorn corals at eight underwater nurseries located from Ft. Lauderdale south through the Florida Keys and U.S. Virgin Islands in 2009. The project initially aimed to grow 12,000 coral colonies, but instead raised 30,000 of the fast-growing branching corals. Up to 10,000 of these staghorn and elkhorn colonies, ranging from the size of tennis balls to soccer balls, are scheduled to be transplanted before the end of 2012.

"These two species of coral are the most important to the reef system â they are the girders and I-beams of reefs that provide critical fish habitat," said James Byrne, marine biologist for The Nature Conservancy, which is overseeing the project.

In 2006, staghorn and elkhorn corals became the first corals to be listed as threatened under the Endangered Species Act. In the Florida Keys and Tortugas, populations of these iconic corals have suffered serious decline since the 1970s due to disease, coral bleaching and hurricanes.

Scientists have strategically selected transplant locations to maximize genetic diversity and the chance of sexual reproduction.

"In our nursery, we have one genotype of coral that was lost altogether in the wild during the cold water bleaching in 2010," said Erich Bartels, manager of Mote Marine Lab's Coral Reef Science and Monitoring Program, which is growing corals in an underwater nursery in the Lower Keys. "This genotype that was preserved in the coral nursery, along with others originally collected from a wide range of locations and habitats, will be placed back out on the reef using methods designed to help increase the corals' genetic diversity and give them a better chance at survival and natural reproductive success."

The project is managed by The Nature Conservancy in partnership with NOAA, Mote Marine Laboratory, Nova Southeastern University, University of Miami RSMAS, the Coral Restoration Foundation and Florida Fish and Wildlife Conservation Commission. It was one of 50 projects chosen to receive funding by NOAA's Restoration Center through the America Recovery and Reinvestment Act in 2009.

"Millions of people depend on these reefs for food, coastal protection, and income from tourism," said Samuel Rauch, NOAA's assistant administrator for Fisheries. "Restoring them is not only an environmental imperative, it's a public priority."

The funding for the project ends this year and the research partners are in the process of seeking new grants to continue restoration efforts. "It will be critical to continue to monitor the transplanted corals â to look for signs of disease and to keep the predator populations down â over the next several years to ensure the success of the restoration," Byrne said.